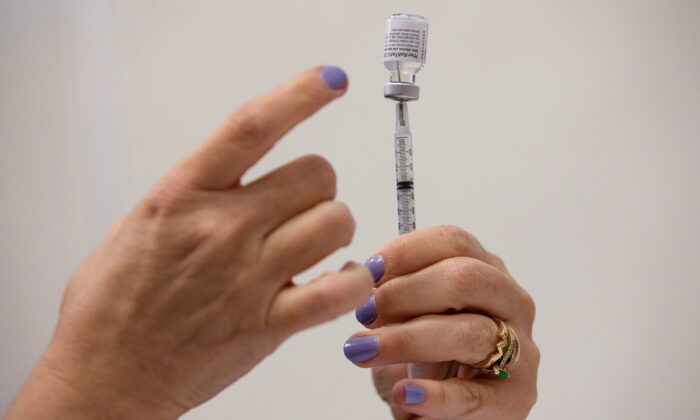 A nurse fills up syringes for patients as they receive their COVID-19 booster vaccination during a Pfizer-BioNTech vaccination clinic in Southfield, Mich., on Sept. 29, 2021. (Emily Elconin/Reuters)
Vaccines & Safety

Side Effects From COVID-19 Vaccines Are Difficult to Distinguish From Early Symptoms of Virus: Study

Post-COVID-19 vaccination side effects cannot be clearly differentiated from the early symptoms of the virus, according to new findings led by researchers at King’s College London and published last week in the eClinical Medicine journal.

The study analyzed data from 362,770 UK users of the CSS App aged between 16–90 years who had been vaccinated between Dec. 8, 2020 and May 17, 2021, and who subsequently reported at least one symptom associated with COVID-19 within the first seven days of vaccination, other than local symptoms at the injection site.

Of these, 14,842 people took a PCR or lateral flow test, and 150 people (1 percent) subsequently reported being positive for the CCP (Chinese Communist Party) virus, which causes the disease COVID-19.

In order to identify the differences between early COVID-19 and post-vaccination side effects, researchers used machine learning models to review a comprehensive list of 28 symptoms associated with the virus, including headaches, nausea, diarrhea, and fatigue, among others.

They also analyzed the data using just the three core symptoms emphasized by the UK’s National Health Service: a high temperature, new continuous cough, and loss or change in sense of smell or taste.

Researchers said that the machine learning models found it difficult to differentiate between symptoms in people who were diagnosed with COVID-19 and symptoms due to having received the shots with “clinical robustness,” unless a test was taken.

“Differentiating post-vaccination side-effects alone from early COVID-19 was challenging, with a sensitivity in identification of individuals testing positive of 0.6 at best. Most of these individuals did not have a fever, persistent cough, or anosmia/dysosmia, requisite symptoms for accessing UK testing; and many only had systemic symptoms commonly seen post-vaccination in individuals negative for SARS-CoV-2 (headache, myalgia, and fatigue),” researchers wrote.

Researchers noted that individuals who present systemic symptoms post-vaccination should be tested for COVID-19 or self isolate to prevent community spread.

However, scientists noted that they “could not conduct a fair statistical analysis of symptoms after first vs. second vaccination for symptom profiling, given the very small numbers of infected individuals presenting after second vaccination.”

They are also considering using a more complex model to improve the current results, noting that their current sample size limited the use of such models.

“Were a larger dataset to be available, we agree this would be a potential approach,” they wrote.

Three COVID-19 vaccines—Pfizer-BioNTech, AstraZeneca, and Moderna—are currently being used in the UK.

According to the UK’s Medicines and Healthcare products Regulatory Agency (MHRA), more than 1 in 10 people can suffer minor adverse reactions to the vaccines including pain at the injection site, fatigue, headache, myalgia (muscle pains), chills, arthralgia (joint pains), and fever.

However, the agency states that these reactions are typically mild or moderate and resolve within a few days, adding that they are usually reported less frequently in those aged 55 or above than in younger people.

The findings come shortly after the discovery of the COVID-19 Omicron variant, which is now in 38 countries. No deaths have so far been reported from the new variant, which was first found in South Africa.

There are currently 437 confirmed cases of Omicron in the UK, official figures show.