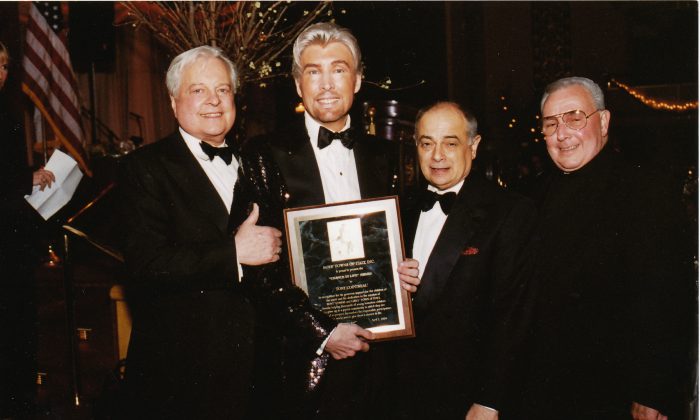 This week’s style diary is about Tony Cointreau. Tony Cointreau, an heir of the French liqueur family, has led many lives. At 21, Tony was on stage, living in New York and California, and performing everywhere from Las Vegas to Carnegie Hall. Although Tony’s career as a performer was successful, he eventually traveled to Calcutta, where he was drawn to Mother Teresa’s work. In the early ’90s, Tony began volunteering at Gift of Love, Mother Teresa’s home in Greenwich Village for destitute men dying of AIDS. Unexpectedly, he found that Mother Teresa became his mentor and “other mother” as they worked together to take care of the sick and the dying over the next 12 years. He and Jim Russo, his now-husband and partner of fifty years, returned to India in 1997 to be with Mother Teresa for the last Easter week of her life. Tony, who recently published his newest book, “A Gift of Love: Lessons Learned from My Work and Friendship” with Mother Teresa and celebrated it at a book party on Sept. 20 at Michael’s, is sharing with us this week his perspective on style.

Style is the sense of feeling confident in the presentation of yourself, whether you are in jeans or black tie.
— Tony Cointreau

Tony Cointreau: Having been brought up in Europe and the United States, I would describe my style as international.

Ms. Eschapasse: If a close friend were to describe your personality in three words, what would they be?

Mr. Cointreau: I would hope my friends would think of me as loyal, generous, and caring.

Ms. Eschapasse: How has your style evolved since you were a teenager?

Mr. Cointreau: I can honestly say my sense of style is the same as when I was a teenager. I always had to wear a jacket at school, and that has stayed with me to this day. Although now, when I attend a black tie event, I look forward to wearing something unique.

Ms. Eschapasse: What is the wildest thing you have ever worn?

Mr. Cointreau: I once bought a fuchsia satin Versace evening jacket with black beading that I wore when I was honored with the Chance in Life Award from the Boys and Girls Towns of Italy. I still love the jacket. I still have it and wear it.

Ms. Eschapasse: How do you dress on workdays versus weekends?

Mr. Cointreau: Since I don’t go to an office every day, it varies very little. My summer uniform is a pair of slacks worn with a long-sleeved cotton shirt, which I have custom made. When the temperatures fall, I tend to wear a turtleneck paired with a jacket and loafers.

Ms. Eschapasse: What are three accessories you can’t live without?

Mr. Cointreau: I cherish things that have sentimental value to me—Ethel Merman’s gold-and-diamond watch, a miraculous medal Mother Teresa blessed and kissed for me, and, of course, my wedding ring.

Mr. Cointreau: The first extravagant piece of clothing I ever bought, many years ago, was a Claude Montana black leather jacket covered with silver bugle beads. It still makes me happy and confident when I wear it.

Ms. Eschapasse: Who have been your greatest fashion influences?

Mr. Cointreau: I only had one—my father, who I have always considered a true gentleman. Every day he wore a suit and tie and hat, whether it was sun or snow. In his day, when the look was really required of him by society, he had a certain elegance that made him stand out.

Ms. Eschapasse: Who are your style icons?

Mr. Cointreau: Geoffrey Bradfield is a friend who I think is always appropriately dressed for every occasion.

Ms. Eschapasse: What does having style mean to you? In other words, please define style.

Mr. Cointreau: Style is the sense of feeling confident in the presentation of yourself, whether you are in jeans or black tie.

Ms. Eschapasse: What is one purchase you’re most proud of?

Mr. Cointreau: I am proud of so many things in my life that have nothing to do with purchases, but if I had to, I would say it would be the ring that I bought Jim when we were finally able to be married in 2008, and a small fabric bracelet I purchased years ago in India when I was working with Mother Teresa because it reminds me of my time spent with her whenever I wear it.

Ms. Eschapasse: I would never pay much money for…

Mr. Cointreau: Ties—because I prefer open collars for casual wear, or open collars with a jacket and scarf for a dressier occasion.

Ms. Eschapasse: When you go on the red carpet, how do you want your outfit to make you feel?

Mr. Cointreau: I like to feel that my sense of style is unique, and over the years I have tried to find dinner jackets that are original.

Ms. Eschapasse: Which designers can help you achieve that?

Mr. Cointreau: Gianfranco Ferré. I once bought a Ferré set of tails, with one shoulder embroidered with black on black, for Elton John’s “White Tie and Tiara Ball,” given at his home in Windsor, England. For more sedate occasions, I admire the elegance of Ralph Lauren.

Ms. Eschapasse: What do you think of how others dress and what’s your advice to people who would like to develop their personal style?

Mr. Cointreau: I don’t judge anyone. Each person has to develop their own style, which has to come from within them.

Color: Red
Perfume: Terre d’Hermes
Restaurant in New York: the late Swifty’s, and Michael’s
Drink: Scotch on the rocks with a dash of olive juice
Movie: “The Notebook” — I keep the last scene in my iPhone
Book: “The Little Prince”
Quote: “Do small things with great love” — Mother Teresa

Sibylle’s “Style Diary” is a column that explores style from the perspective of choices, and what that means for different people, with personal advice from some of the most stylish people in New York.

Sibylle Eschapasse is from Paris and now lives in Manhattan. She is a journalist and a contributing writer to various publications. Sibylle is also the author of a children’s book, “Argy Boy a New York Dog Tale.” She may be reached at sibylle.eschapasse@gmail.com