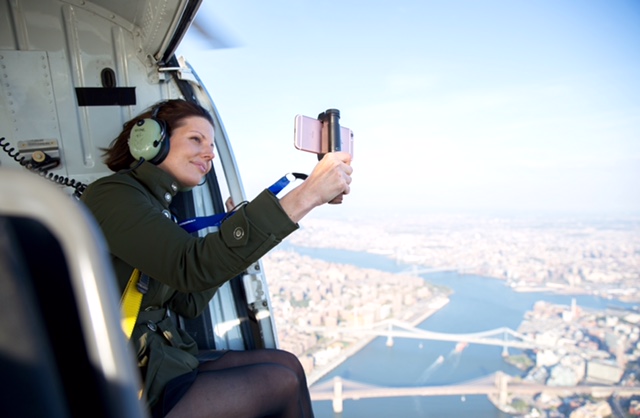 New York, New York! As Iman said once, “New York is not a city. It’s a world!” An amazing place, always in motion, with a vibrant and uplifting energy—and filled with a positive spirit where everything seems, and is indeed, possible. It’s the quintessence of cosmopolitism and where so many cultures respect each other and live in harmony together. A place like no other where you can reinvent yourself as the image of the city. The true capital of media, of the arts, entertainment, and philanthropy. There is no place else like New York. A city that can be difficult, too—imagine its winter—and where people work very hard to pursue their dreams. But Frank Sinatra was right: “If I can make it there, I’m gonna make it anywhere. It’s up to you, New York, New York!”

Practically everybody in New York has half a mind to write a book – and does.
— Groucho Marx, American comedian
There is something in the New York air that makes sleep useless.
— Simone de Beauvoir, French writer and famous feminist
Things always change and New York teaches you that.
— Richard Hell, American singer
I go to Paris, I go to London, I go to Rome, and I always say, “There’s no place like New York.” It’s the most exciting city in the world now. That’s the way it is. That’s it.
— Robert De Niro, American actor and producer
New York is the whole world in one city. Just look at the people, every culture, the diversity and all the great neighborhoods. It’s all here.
— Ernie Anastos, New York Emmy award-winning TV news anchor
No place epitomizes the American experience and the American spirit more than New York City.
— Michael Bloomberg, former mayor of New York, business magnate, politician and philanthropist
Like the United Nations, there is something inspirational about New York as a great melting pot of different cultures and traditions. And if this is the city that never sleeps, the United Nations works tirelessly, around the clock around the world.
— Ban Ki-moon, Secretary General of the United Nations until the end of 2016
My favorite thing about New York is the people, because I think they’re misunderstood. I don’t think people realize how kind New York people are.
— Bill Murray, American actor and writer
New York has romanced me unlike anything else.
— Blake Lively, actress
When I moved to New York, I bought Vogue instead of dinner. I just felt it fed me more.
— Carrie Bradshaw in 'Sex in the City'
One belongs to New York instantly. One belongs to it as much in five minutes as in five years.
— Thomas Wolfe, American writer
Make your mark in New York and you are a made man.
— Mark Twain, American writer
A hundred times have I thought New York is a catastrophe, and fifty times: It is a beautiful catastrophe.
— Le Corbusier, Swiss-French architect
When you leave New York, you are astonished at how clean the rest of the world is. Clean is not enough.
— Fran Lebowitz, American author and public speaker
Once you have lived in New York and made it your home, no place else is good enough.
— John Steinbeck, American writer
New York, concrete jungle where dreams are made of, there’s nothing you can’t do, now you’re in New York, these streets will make you feel brand new, big lights will inspire you. Let’s hear it for New York, New York, New York.
— Lyrics of Empire State of Mind by Jay Z and Alicia Keys
I get out of the taxi and it’s the only city which in reality looks better than on the postcards, New York.
— Milos Forman, Czech film director
He adored New York City. He idolized it all out of proportion… No, make that: he romanticized it all out of proportion. Yes. To him, no matter what the season was, this was still a town that existed in black and white and pulsated to the great tunes of George Gershwin.
— Woody Allen in the movie 'Manhattan'
The city seen from the Queensboro Bridge is always the city seen for the first time, in its first wild promise of all the mystery and beauty in the world.
— F. Scott Fitzgerald, American writer
New York was a city where you could be frozen to death in the midst of a busy street and nobody would notice.
— Bob Dylan, American singer and laureate of the 2016 Nobel Prize in Literature
I regret profoundly that I was not an American and not born in Greenwich Village. It might be dying, and there might be a lot of dirt in the air you breathe, but this is where it’s happening.
— John Lennon, English singer
The glamour of it all! New York! America!
— Charlie Chaplin, English comic actor and filmmaker
One’s life and passion may be elsewhere, but New York is where you prove if what you think in theory makes sense in life.
— Miuccia Prada, Italian fashion designer
New York ladies all look immaculate.
— Zac Posen, American fashion designer
I can’t with any conscience argue for New York with anyone. It’s like Calcutta. But I love the city in an emotional, irrational way, like loving your mother or your father even though they’re a drunk or a thief. I’ve loved the city my whole life—to me, it’s like a great woman.
— Woody Allen, American actor, filmmaker and musician
I love New York, even though it isn’t mine, the way something has to be, a tree or a street or a house, something, anyway, that belongs to me because I belong to it.
— Truman Capote, American novelist, screenwriter, playwright and actor
When I’m back in New York – and this is a terrible thing to complain about – I eat a lot more really, really good food than perhaps I’d like to. So many of my friends are really good chefs. It’s kind of like being in the Mafia.
— Anthony Bourdain, American Chef, author and television host
In New York, they like winners. They don’t like second place.
— Eli Manning, American football player
You haven’t lived until you died in New York.
— Alexander Woollcott, American critic and commentator for the New Yorker magazine

Sibylle Eschapasse is from Paris and now lives in Manhattan. She is a journalist and a contributing writer to various publications. Sibylle is also the author of a children’s book, “Argy Boy a New York Dog Tale.” She may be reached at sibylle.eschapasse@gmail.com