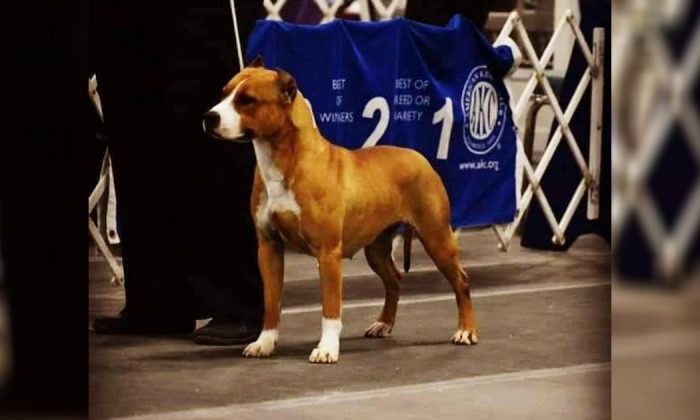 Gayle the 22-month-old red white American Staffordshire terrier disappeared minutes before she was due to board her flight at Atlanta, Ga., on March 23. (Courtesy of K9kait/Facebook)
US News

Update: Gayle has been found and reunited with her owner

A show dog has disappeared just minutes before she was due to board her flight departing from Atlanta, Ga., on March 23.

Nearly three hours before the flight departed the dog was secure in her crate and had already gone through security.

However, just 10 minutes before she was due to board, KLM Royal Dutch Airlines staff discovered her kennel was empty and asked owners Floris van Essen and Claudia van Essen Dufornee to make themselves known to airport staff.

Although Gayle is microchipped, crew staff noticed the kennel was empty while they were loading it onto the airplane. The van Essens were asked to board the flight without the dog and reassured airport staff would keep looking for the dog.

A prize-winning show dog reportedly went missing before a flight in Atlanta https://t.co/s8LlX3vlGe

About 10 minutes before boarding, the dog’s handlers were told that when workers went to load the dog’s crate, they discovered it was empty https://t.co/ZUcRUBQjro

The owners appealed on the internet to fellow animal lovers to help find Gayle.

“Please!! Urgent message!! I need your help finding this dog,” Kaitlyn Ross, curator or the doggy digital hub K9Kait, said in a Facebook post dated March 24. “She got loose in the Atlanta Airport while waiting to board the plane. The staff left her alone in the crate outside and she escaped her crate during that time.”

She described the Gayle’s personality as insecure, and encouraged anyone who sees her to try to call the dog to approach.

“She is social but can be a little scared or panicked by the situation,” Ross said. “Please share and bring this girl back safe.”

“As you can imagine, this is just a horrible ordeal,” Floris told K9Kait in a written statement.

The post went viral and started a city-wide dog hunt, with many people reporting similar looking animals to the website.

The Atlanta, GA—Lost Dogs, Cats, and Pets community page confirmed Gayle has finally been found and reunited with her owners.

Many people following the missing case were relieved to learn Gayle was already back at home.

“So happy she was found and reunited,” Suzanne Chillakuru said.

A show dog went missing for four days at the world’s busiest airport. Thankfully, Gale has been found. https://t.co/6a4qRuq1sf

A show dog that was flying home to Amsterdam after her last competitive event was found after she’d been missing from Atlanta’s Hartsfield-Jackson International Airport for four days. https://t.co/kEEc3IGrXL