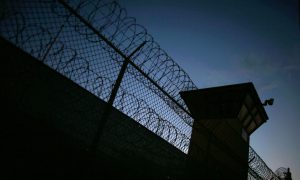 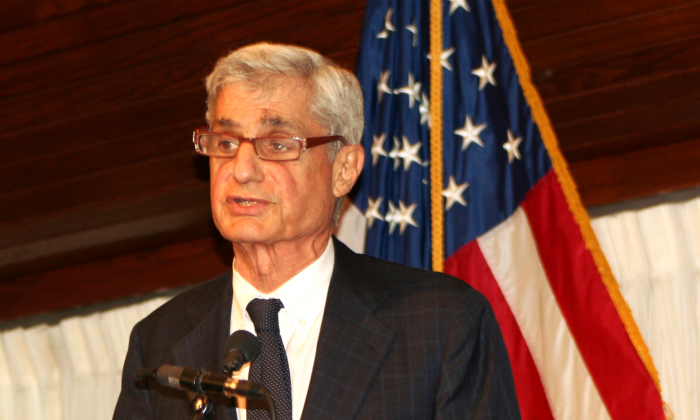 Robert Rubin, co-chair of the Council on Foreign Relations and former U.S. secretary of the treasury in the Clinton administration, introduced a discussion “The Economic and Social Effects of Crime and Mass Incarceration in the United States,” at the National Press Club on May 1, 2014. He questioned the wisdom of the U.S. policy of heavy incarceration. (Gary Feuerberg/Epoch Times)
US

Should the US Reconsider Locking People Up?

WASHINGTON—The United States has the dubious distinction of having the highest incarceration rate in the world. When all the inmates in our local jails, state and federal prisons, and privately run facilities are counted, the sum is 2.2 million incarcerated—a rate of 710 per 100,000 U.S. residents. By contrast, our neighbor Canada’s incarceration rate was 118 in 2011–12; Mexico’s rate was 210 in 2013.

These data are cited in a May 2014 policy memo from the Hamilton Project, an economic policy initiative at the Brookings Institution launched in 2006. In “Ten Economic Facts about Crime and Incarceration in the United States,” by Melissa S. Kearney, et al., the U.S. incarceration rate is more than six times higher than the typical rate of 115 for a nation in the Organization for Economic Co-Operation and Development, which are the largest economies in the world.

The high rate in the United States is unprecedented and unique, but it wasn’t always that we were the outlier. According to the same source, the growth began in the 1970s, reached 220 in 1980, and continued upward to 756 in 2008. Since then, the rate has tapered off to 710 due to reductions in state correctional facilities.

Having so many in our corrections system has lately been under intense scrutiny for wasteful use of resources and harm caused to communities from which the incarcerated come.

“I believe that our current policy regime with respect to incarceration and the paucity of intervention to prevent people from getting involved in counterproductive behavior is social and economically counterproductive, socially and economically destructive, and with respect to individuals, deeply unjust in many cases,” said Robert Rubin, former Secretary of the Treasury, at the National Press Club’s May 1 forum, “The Economic and Social Effects of Crime and Mass Incarceration in the United States.”

Rubin was one of the founders of the Hamilton project—named after Alexander Hamilton—which offers proposals on how to grow an economy that benefits more Americans. Rubin said the current policies that result in massive incarceration of Americans are not only ineffective but are also not aligned with fostering broad participation in economic growth. He shares with his colleagues in the Hamilton Project that government has a necessary role to play in in creating solutions.

The increase in the prison population is not due to increases in crime. Crime rates have steadily declined over the past 25 years, according to the FBI crime rate index quoted in Kearney, et al. Violent crime fell by 33 percent from 1991 to 2001. The increased incarceration can instead be attributed to changes in federal and state sentencing policies.

Federal laws enacted, such as the Sentencing Reform Act of 1984 and the Anti-Drug Abuse Act of 1986, removed much of the discretion that judges and parole boards had on sentencing and releasing prisoners, respectively. States got into the act, too, whereby all 50 plus the District of Columbia adopted mandatory sentencing laws between 1975 and 2002, requiring minimum sentences for specific offenses.

So-called “truth-in-sentencing” laws require that violent offenders serve a minimum proportion of their sentence. By 2008, 28 states had such laws that extended serving time to 85 percent of the sentence. Some states applied the requirement to nonviolent offenders.

A big factor in the high incarceration rate over the last several decades can be attributed to drug control policies, imposing sentences for offenses that other countries would not, and for imposing “much longer prison sentences for drug-related offenses than many economically similar nations,” states the Kearney memo.

Mandatory sentencing “ties the hands of parole authorities, leading to incarceration spells that are unjustifiably long for some inmates,” wrote Steven Raphael and Michael A. Stoll in a Hamilton Project discussion paper that was released at the forum.

The collateral damage to individuals and communities with high incarceration rates is highly destructive, as Rubin noted.

“There is nearly a 70 percent chance that an African American man without a high school diploma will be imprisoned by his mid-thirties,” states the Kearney policy memo. This statement applies to men born between 1975 and 1979.

Families are impacted, too. “By their 14th birthday, African American children whose fathers do not have a high school diploma are more likely than not to see their fathers incarcerated,” states the Kearney policy memo.

Rubin said that the incarceration conditions undermine employment prospects for the incarcerated, increase behavioral problems in children with parents in prison, and are “deeply destructive to the society we live in.”

Moreover, states that recently enacted policies that have substantially reduced their state prison population totals have experienced “little or no impact on crime rates,” stated Raphael and Stoll.

“When prisons are used sparingly, incarcerating is reserved for the highest-risk and most-serious offenders,” they wrote. The national debate we are seeing is about “whether incarcerating low-risk, nonviolent criminals—such as those convicted of petty theft or low-level drug activity—provides better returns than alternative forms of punishment, such as enhanced parole.”

The logical answer to reducing incarceration rates is to reverse what drove them up. A good place to start is drug sentencing practices, which if were turned back to 1980s practices, would reduce federal imprisonment by 13 percent, according to the work of Raphael and Stoll. Drug offenders are usually not violent, so a reversal to sentencing for drug offenses may elicit less political resistance.

Several states have begun a re-evaluation of their incarceration policies. Raphael and Stoll provided the information below on Texas and New York City.

Texas began to moderate its approach to offenders in 2005, placing more emphasis on treatment and alternatives to incarceration. A reform sentencing law enacted in 2002 allowed “judges greater discretion to send sentenced inmates to treatment in lieu of prison and effectively reversed all mandatory minimum sentences for drug offenders.” The law also addressed prisoner reentry into society. The result is that between 2002 and 2012, the state experienced a 12.5 percent decline in incarceration rate.

New York City has shifted policing priorities away from drug crime, resulting in fewer drug arrests and sentencing for drug offenses. Legislation in 2003 and especially in 2009, “reduced the scope of crimes subject to mandatory minimum sentences, reduced the severity of such offenses, and greatly increased the discretion of judges in assigning sentences that are proportionate to the underlying offense.”