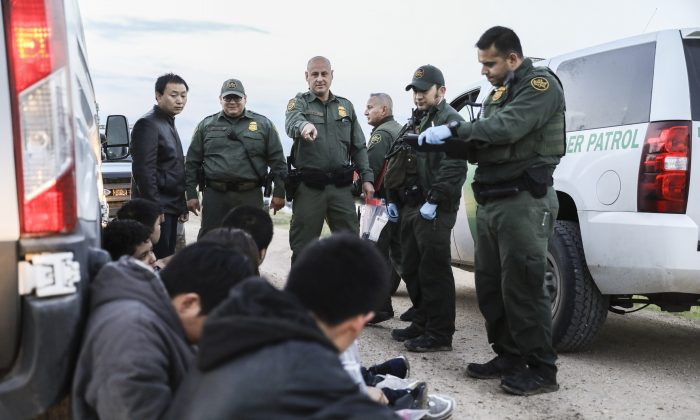 Border Patrol agents apprehend seven illegal immigrants from China, one from Mexico, and one from El Salvador after they tried to evade capture after crossing the Rio Grande from Mexico into the United States near McAllen, Texas, on April 18, 2019. (Charlotte Cuthbertson/The Epoch Times)
Viewpoints

Should Illegal Aliens Be Counted in the Census? Supreme Court to Decide

On June 12, the House Oversight and Reform Committee voted to hold U.S. Attorney General William Barr and Commerce Secretary Wilbur Ross in contempt of Congress, after the White House exerted executive privilege over documents that shed light on the Trump administration’s decision to add a citizenship question on next year’s census.

The idea of a citizenship question on the U.S. census isn’t new. However, the last time it appeared on the census was in 1950.

Democrats say the Trump administration is stonewalling their investigation into why the question was added, despite the fact that the administration has already turned over tens of thousands of documents and has made witnesses available.

As NPR reported, “Critics argue that Trump’s administration wants to use a question about citizenship on the 2020 census to suppress some responses, including those of Latinos, and Democrats say they want unredacted communications to see how the question was discussed inside the government.”

But, let’s be honest here, the only people who would balk at a citizenship question are illegal aliens. Those are the only people who would potentially be “disenfranchised” by this change. That’s who Democrats (once again) are defending, not U.S. citizens. It’s difficult to imagine that the founding fathers envisioned a foreign national who violated our laws and is now living illegally in the United States being included in an “actual enumeration” of “free persons,” aka a census.

The census determines who gets congressional seats and federal funding. But in states such as California and New York, many of the residents are there illegally, which could prompt them to not participate in a census if a citizenship question is listed. This would mean that Democrat-controlled areas would have fewer people counted and lose seats in Congress, as well as some federal funding.

Asked last year if a citizenship question should be on the census, civil liberties attorney Alan Dershowitz told CBS 11: “The answers to the specific questions … are very complex and very difficult and we haven’t really begun to sort them out. And I think these are the kinds of questions that we have to begin to ask. And they’ll be asked—not only in the halls of Congress—but in the courts.

And despite the many questions this issue raises, his last point is of primary concern—to what degree (if any) should illegal aliens be able to shape congressional seats and determine federal funding? That’s the real issue here. And, to be sure, that’s all this is about, for Democrats.

Progressives benefit from illegal aliens being counted and they want it to continue, as long as it does benefit them. Interestingly enough, California and New York have already announced lawsuits aimed at blocking the addition of a citizenship question. Why not Maine? Why not Wyoming? Why not Montana or Hawaii? Would progressives react the same way if counting illegal aliens gave Republicans additional seats in the House?

The answer is obvious.

Ross said in a statement that, after a review by the Department of Commerce, there is only “limited empirical evidence” about “whether adding a citizenship question would decrease response rates materially.”

He also stated that this type of inquiry isn’t uncommon around the world, citing the United Nations’ recommendation that “member countries ask census questions identifying both an individual’s country of birth and the country of citizenship.”

We’ve spent the past three years with progressives whining about “foreign interference” in our elections, so it’s interesting to see such strong objections to measures that may have the consequence of limiting foreign nationals from determining congressional makeup.

So, should illegal aliens be counted toward the census and determine congressional seats and federal funding? It’s a question that will now have to be resolved by the U.S. Supreme Court.