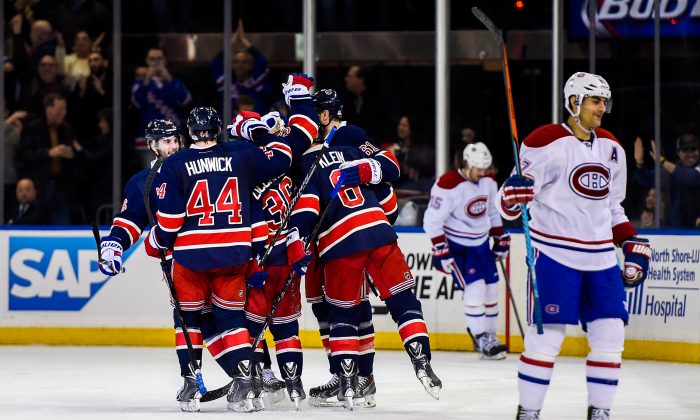 The New York Rangers celebrate a goal against the Montreal Canadiens at Madison Square Garden on Nov. 23, 2014 in New York City. Surprisingly, the regulation time loss by high-flying Montreal was its sixth by at least three goals this season. (Alex Goodlett/Getty Images)
Canadian Content

The Montreal Canadiens are a bit of an enigma. How can all six of a league-leading team’s regulation-time losses be so one-sided? And since the team’s obviously doing something right, does it matter?

But these lopsided losses don’t seem to have much of a common thread running through them. Three have come on the road, three have come at home, four have started with Carey Price in goal, and two with backup Dustin Tokarski between the pipes.

The Habs’ first loss (at Tampa Bay 7–1) came at the end of a brutal start to the season in which Montreal played four road games in six nights. They won the first three and were basically playing with house money against the Bolts.

But the 3–0 loss to Edmonton came with the team being well rested and on their first game on a tour of Western Canada. Similar can be said for their return home from said trip in which they lost to Calgary 6–2 and two nights later to Chicago 5–0.

What’s interesting is it hasn’t been the same player(s) or line that has consistently had bad games in these one-sided losses. Just focusing on five-on-five play in the six losses, the most times a certain player has been a -3 or worse is twice.

One of those players, Rene Bourque, is no longer with the team. And sometimes, that player has been a +1 in another one of the six one-sided losses (Lars Eller, Max Pacioretty, David Desharnais, Brendan Gallagher). So this would seem to suggest that it’s not consistently one line or defensive pairing that is getting beaten up when things start going down hill rapidly.

One cause for concern is that Montreal hasn’t shown recently that resilient spirit to come from behind in the third period and win or tie. In October, the Habs stole victories from Washington, Philadelphia, and Detroit. In all three cases, they were trailing after two periods. Against the Flyers, they were down by three goals entering the third period.

But the last time Montreal fought back like that was Oct. 21. Since then, a deficit after two periods has usually only gotten worse.

Montreal is also one of the worst teams in the NHL at scoring goals in the first period.

On the bright side, since when the Canadiens lose in regulation, they seem to only lose badly, they must be doing pretty well in close games. In one-goal games, Montreal is 7–0–1. They’ve done well in overtime/shootouts too (five wins, one loss).

In fact, Montreal has been downright dominant at times this season. The one-sided loss to Pittsburgh put an end to a six-game win streak—the last five of those wins were by three or more goals (combined score of 22–5).

Montreal’s lopsided losses have to be taken in context. It remains to be seen if they continue, just like their ability to come back after a two-period deficit seems to have stopped.

It’s a start to the season that has to have exceeded expectations for the Canadiens who have also been relatively injury-free. There are areas for improvement, of course, such as getting off to better starts in games and rediscovering the fighting spirit when down after two periods.