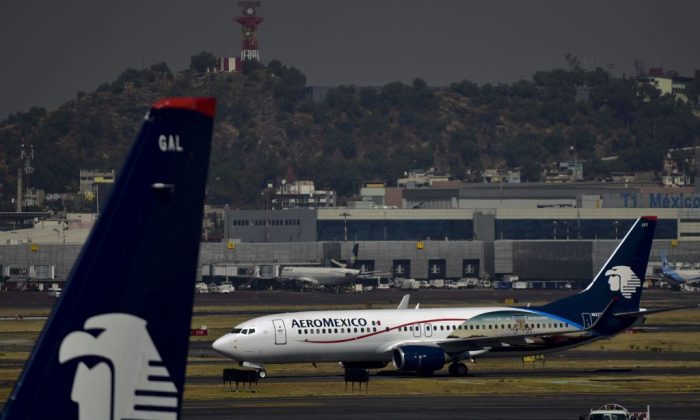 An airplane of Aeromexico sits on the tarmac at Mexico City's international airport, on November 28, 2017. (PEDRO PARDO/AFP/Getty Images)
Americas

MEXICO CITY—An attempted robbery turned into a shootout close to Mexico City’s international airport on Friday morning in which an alleged attacker was killed and two men were injured, according to security officials.

Mexico City Police said they believed that at least one gunman on a motorcycle opened fire on a vehicle carrying two passengers, one of whom—a bodyguard—fired shots in return, fatally wounding the alleged robber.

Flights and other operations were not affected by the incident, according to the airport’s media office.

Images published by outlet Telediario showed a black SUV with bullet holes in the windshield and a crumpled motorcycle in front of it, just a short distance from a traffic circle where passengers arrive at and leave the airport’s Terminal 2.

The shootout began outside the sprawling airport property, according to officials. It was not immediately clear if any shots were fired within the airport perimeter.

Police Chief Omar Garcia Harfuch said in a post on Twitter that the two injured men were “out of danger.”

Violent incidents are not common at Mexico City’s airport, the country’s biggest. However, in 2007, the severed heads of two men who worked for a private customs firm were found nearby.

This week, authorities seized 24 kilograms of cocaine in a area of the airport used by Mexico’s postal service.