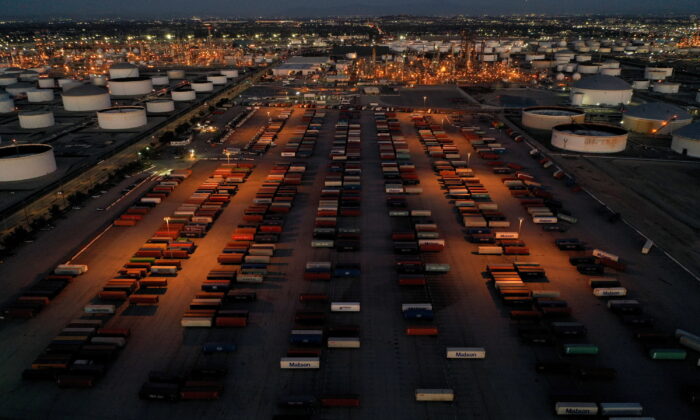 Cargo shipping containers are seen (by a drone) in a storage yard surrounded by petroleum storage tanks and oil refineries in Carson, Calif., on Mar. 11, 2022. (Reuters/Bing Guan)
Energy

The energy crisis in Europe and the resultant higher demand for cargo ships to transport fuels is creating upward pressure on fuel costs.

Following Russia’s invasion of Ukraine, the European Union (EU) imposed sanctions on the Kremlin. In response, Russia began curtailing gas supplies to the region, creating a scramble for energy on the continent. To replace Russian supplies, Europe is now left with no choice but to import oil and gas from other places.

As ships carry fuel to Europe from more distant places, these vessels are occupied for a longer period and not returning back to service as they normally used to. This has sparked an increase in global freight rates, shipping experts told Bloomberg.

Transporting a cargo of naphtha petrochemical feedstock, for example, from the Middle East to Japan now costs double what it did in March. In the United States, shipping a cargo of oil to China is at its highest level since 2020.

Hence, the companies are forced to store supplies in vessels off the coast, which is also referred to as “floating storage.” This practice adds to the shortage of vessels.

“We would expect there to be more floating storage,” Oystein Kalleklev, chief executive officer of shipowner Flex LNG Management AS, told Bloomberg.

“However, the LNG gas carrier market is mostly sold out for the winter, so we would expect traders to utilize the ships in their existing portfolio.”

According to Ed Morse, global head of commodities research at Citigroup, Europe’s energy crisis could last for three or more years.

“It’ll be somewhere between 2025 and 2027 that we’ll see the prices in Europe coming back to where they were at the beginning of 2021,” he said in an interview with Bloomberg.

During a press conference in late August, Shell CEO Ben van Beurden also warned that the energy crisis facing Europe might last for several winters and that energy rationing may be required to manage the situation.

Energy prices in Germany, one of the largest economies in Europe, broke through the threshold of  €1,000 per megawatt hour for the first time last month.

Limited electricity and energy supplies also pose social threats to Europe. While attending an event in Washington recently, Kristalina Georgieva, managing director of the International Monetary Fund, said that “if Mother Nature decides not to cooperate, and the winter is actually harsh, that could lead to some social unrest.”