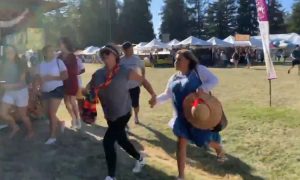 The logo of Airbnb is displayed at an Airbnb event in Tokyo, Japan, on June 14, 2018. (Issei Kato/Reuters)
Northern California

The city council of Orinda, California may implement a ban on short-term property rentals, after a shooting at a Halloween party at an Airbnb-rented property that killed five. The CEO of Airbnb also announced a ban on “party houses” due to the incident.

The Orinda city council made the topic the central focus of discussion at a meeting on Nov. 5, with public testimony and a report on the city’s options.

“At the end of the meeting, they directed staff to return on Nov. 19 with an urgency ordinance that would ban the non-hosted, short-term rentals,” Drummond Buckley, the city’s Planning Director, told The Epoch Times.

“The way the urgency ordinance works is it would be effective immediately on the 19th if they decide to approve it and it could last for up to two years,” Drummond added. “The idea is that it gives the city time to enact more permanent regulations.”

An Instagram advertisement that circulated on social media billed the Halloween event at the Orinda residence as an “Airbnb Mansion Party.”

Orinda Mayor Inga Miller, who ordered flags to be flown at half-staff, referred to the incident as “a tragedy of unimaginable gravity.”

The perpetrator of the shooting has yet to be apprehended. Orinda police chief David Cook said at a local news conference, “We haven’t been able to confirm how many suspects there are, [but] we have no reason to believe they were from Orinda.”

According to the San Francisco Chronicle, law enforcement officials were investigating the possibility that the shooting was related to a 2015 mass shooting in San Francisco’s Hayes Valley neighborhood that resulted in the deaths of four young victims.

Earlier this month, Airbnb’s CEO, co-founder, and Head of Community, Brian Chesky, stated on Twitter that the company was banning “party houses” as of Nov. 2.

Chesky outlined a series of “significant steps” that the company also plans to take in response to the incident.

The proposed four solutions include the introduction of a sweeping verification process of all seven millions listings on Airbnb. All properties must accurately match their listing and meet all “quality standards” that the company requires.

Secondly, any listing that does not satisfy the accuracy standards guarantee guests a complete refund upon check-in. This policy will go into effect on Dec. 15 of this year.

Third, Airbnb will launch a 24/7 Neighbor Hotline which is designed to ensure “that anyone can call us anytime, anywhere in the world and reach a real person at Airbnb.”

The company will employ a rapid response team to make certain that concerned neighbors will be able to reach Airbnb directly. The phone number for the hotline will be featured prominently on the homepage, the app, and “easily searchable on Google.” This program will roll-out globally over the course of 2020.

Finally, the company will initiate a High Risk Human Review beginning on December 15 which is intended to address unauthorized house parties. “Risk scoring helps us focus our attention and find the needle in the haystack,” Chesky wrote.

According to Chesky, “This will help identify suspicious reservations and stop unauthorized parties before they start.”

In the days during the aftermath of the shooting, Chesky tweeted: “We must do better, and we will. This is unacceptable.”

Other cities across the state have also regulated short-term rentals. Los Angeles, for example, imposed a new rule last July that only permits property owners to rent out their primary residence for short-term rentals. In order to do so, owners must register with the city and pay a fee.