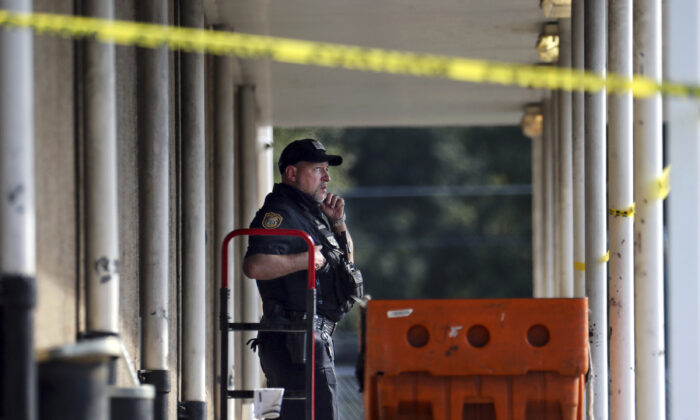 Memphis Police Department officers work the scene of a post office after a shooting, in the Orange Mound neighborhood of Memphis, Tenn., on Oct. 12, 2021. (Patrick Lantrip/Daily Memphian via AP)
Crime and Incidents

Two United States Postal Service employees were shot dead by a third worker at a postal facility in Memphis on Tuesday before the shooter took their own life.

U.S. Postal Inspector Susan Link said the three postal workers were found dead after the shooting at the East Lamar Carrier Annex. The Annex is located at 2801 Park Ave in the prominent Memphis neighborhood of Orange Mound, southeast of downtown Memphis and is typically only used for employees and not retail customers.

The shooting was carried out by a third postal service worker, who died from a self-inflicted gunshot, FBI spokeswoman Lisa-Anne Culp said, The Associated Press reported.

Officials have not yet released any additional information on the shooting, including the identities of the victims or a motive of the shooter, however, a family member identified one of the people who died as James Wilson, a manager, Commercial Appeal reports. The Epoch Times has been unable to independently confirm if Wilson was among the victims.

Wilson was married with no children, his cousin Roxanne Rogers told the local Memphis outlet.

“He didn’t mind going the extra mile for his job or the workers there,” Rogers said. “He wasn’t just a manager, he was a friend to all.”

At around 2:50 p.m. local time, the Memphis Police Department said the East Lamar Carrier Annex is secured and there was no active threat.

“We are working jointly with the Memphis Police Department, the Federal Bureau of Investigation, and the Bureau of Alcohol, Tobacco and Firearms. At this time there is no additional information the Inspection Service can release,” the U.S. Postal Inspection Service said, CNN reported.

The area where the shooting took place has been barricaded and blocked off by officials as they investigate.

A white four-door car was towed from the facility during the investigation but it is unknown who the vehicle belongs to, according to AP.

“The Postal Service is saddened at the events that took place today in Memphis,” USPS said in a statement. “Our thoughts are with the family members, friends, and coworkers of the individuals involved. The Postal Service will be providing resources to all employees at the East Lamar Carrier Annex in the coming days and weeks.”

The latest incident marks yet another high-profile shooting in or near the Tennessee city in recent weeks.

Last month, 29-year-old shooter UK Thang killed one person and wounded 14 others at a Kroger grocery store in Collierville. Thang was a third-party vendor for the supermarket chain where he worked daily. He suddenly opened fire, hitting 15 individuals before he died of an apparent self-inflicted gunshot wound.

Just a week later, a 13-year-old boy was shot and critically wounded by another teenage student at the Cummings School in Memphis. Police detained a second boy believed to be the shooter.

U.S. Rep. Steve Cohen, a Memphis Democrat, said Tuesday’s shooting at the post office marked “the latest site of gun violence” in the Memphis area and that he was closely monitoring developments in the shooting.

“Today’s shooting at the postal facility in Orange Mound is yet another example of why I am concerned that too many guns are out there and in possession of people who aren’t able to control their anger,” Cohen said in a statement. “I express my profound condolences to all those affected by this terrible event.”