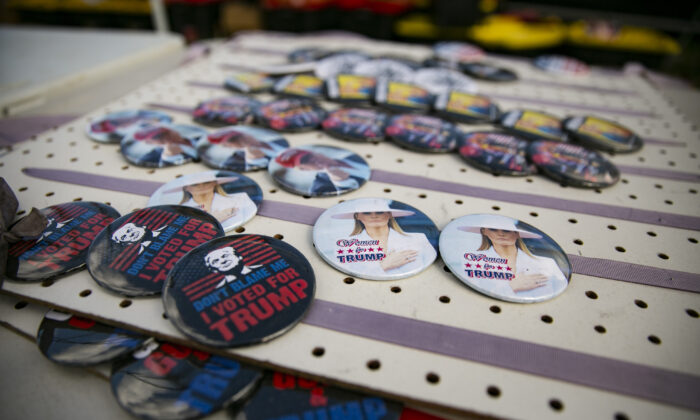 Police said they’re investigating an incident in which a car crashed through the front of a store in Easton, Mass., that sold merchandise associated with former President Donald Trump.

A shocking video released by the Easton Police Department showed a Volkswagen Jetta barreling through the storefront of the New England for Trump shop on June 16, sending merchandise flying and narrowly missing an employee.

Easton Police Department Deputy Chief Keith Boone said in a statement obtained by The Epoch Times that the vehicle was operated by 46-year-old Sean Flaherty, who sustained non-life threatening injuries and was later taken to an area hospital.

“Flaherty has been charged with reckless operation of a motor vehicle and malicious destruction of property,” Boone said, adding that more charges may follow.

The store employee was not injured during the crash, he added.

Boone said police have made a request to the motor vehicles registry to revoke Flaherty’s license “as an immediate threat.”

Brockton Enterprise photographer Marc Vasconcellos shared a series of photographs from the scene in a series of posts on Twitter. One of the photos shows the black Jetta with a number of bumper stickers, including one with an “anarchy” symbol and another featuring a likeness of Trump stylized to evoke a reference to Adolph Hitler.

Local media outlet Patch reported that the store owner told police that hundreds of items were damaged in the crash.

No further details on the crash were immediately available, but the incident comes at a time of heightened political division in the country and concern over a possible spiral of violence.

Recently, a California man was arrested outside Supreme Court Justice Brett Kavanaugh’s home in Chevy Chase, Maryland, with reports indicating he intended to break into the abode and murder the justice.

Republican National Committee (RNC) chairwoman Ronna McDaniel argued in a recent op-ed for Fox News that the incident outside Kavanaugh’s home can be tied to inflammatory remarks by political opponents.

“Unfortunately, this attempted assassination can be traced directly to a longstanding pattern of violent rhetoric from Democrat officials,” she wrote, citing a number of examples, including statements by Senate Majority Leader Chuck Schumer, House Speaker Nancy Pelosi, and Rep. Maxine Waters (D-Calif.).

“Every American remembers the devastating riots that took place in the spring and summer of 2020. However, Democrats would like you to forget the role they played in stoking the fires of resentment that led to billions in damage and dozens of deaths,” McDaniel wrote.

Democrats have denied calling for political violence, while the White House condemned the actions of the man arrested outside Kavanaugh’s home.

“As the President has consistently made clear, public officials, including judges, must be able to do their jobs without concern for their personal safety or that of their families. And any threats of violence or attempts to intimidate justices have no place in our society,” White House press secretary Karine Jean-Pierre told reporters on June 8.