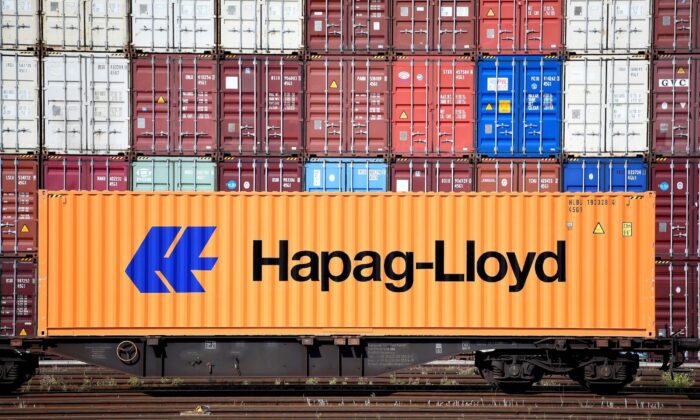 A Hapag-Lloyd container is pictured at a loading terminal in the port of Hamburg, Germany, on July 26, 2018. (REUTERS/Fabian Bimmer/File Photo)
Companies

German shipping giant Hapag-Lloyd has reported a more than tenfold rise in profits over the past nine months, citing record freight rates amid scarce transport capacity and robust demand.

The world’s fifth-biggest operator said in a Nov. 12 earnings report that net profit climbed to $6.41 billion in the nine months between January and September 2021, up from $616 million in the comparable period in 2020.

“Despite all the operational challenges, we achieved an extraordinary strong nine-month result,” Rolf Habben Jansen, CEO of Hapag-Lloyd, said in a statement, in which he added that global supply chains remain “under enormous pressure.”

Jansen said his company would do “everything in our power” to help resolve logjams at ports and other transportation bottlenecks “through targeted investments and flexible capacity management.”

On an earnings call, Jansen told analysts that higher efficiency could ease waiting times at ports and help alleviate some of the supply snarls.

“There is a lot that still can be done in terms of efficiency, not only on the terminal side but also the ability to deliver boxes to customers,” Jansen said on the call.

“That would allow us to get rid of some of the congestion,” he said of the disruptions resulting from unexpected demand spurts, labor shortages, and traffic snarl-ups amid the coronavirus pandemic.

The Biden administration recently announced a multibillion-dollar plan to alleviate immediate supply chain bottlenecks at ports as part of efforts to address potential shortages of goods and price hikes leading up to the holiday season. The plan includes accelerating port infrastructure grants and new construction projects for coastal navigation, inland waterways, and land ports of entry.

Leading U.S. ports are seeing record volumes of shipping containers, with some ships still waiting to dock. Coupled with labor shortages, this has led to higher costs to transport goods, helping push inflation up to multi-decade highs. The most recent consumer price index (CPI) report from the Bureau of Labor Statistics showed that the over-the-year consumer price inflation rate surged 6.2 percent, the highest reading in nearly 31 years.

It comes as waters off the coast of Southern California continued to see record-breaking numbers of cargo ships this week.