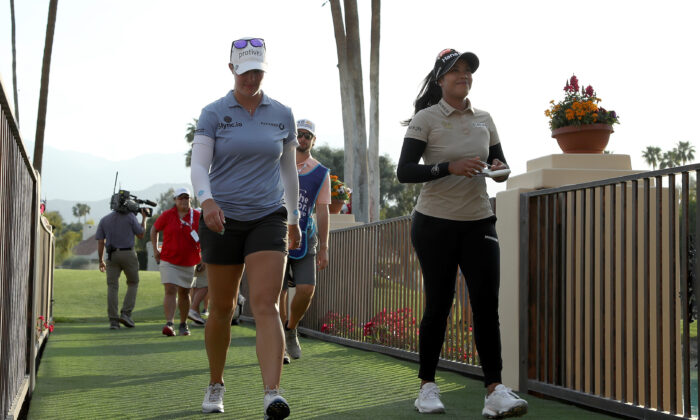 Patty Tavatanakit of Thailand and Jennifer Kupcho of the United States walk off the 18th hole following the third round of The Chevron Championship at The Westin Mission Hills Golf Resort & Spa on April 02, 2022 in Rancho Mirage, California. (Katelyn Mulcahy/Getty Images)
Golf

Jennifer Kupcho shot her lowest round on the LPGA tour, 8 under 64, Saturday to take a commanding six shot lead at 16 under into the final day of the first LPGA major of the year at The Chevron Championship 2022 at Mission Hills.

“Everything was working. I mean, seriously, this week I think my putting is definitely the props,” said Kupcho, 24. “I have putted really well, and you got to make putts in a major championship.”

Kupcho, from Colorado, has yet to win on the LPGA Tour, with a best major finish tied for second at The Evian Championship in 2019.

In her senior year at Wake Forest, Kupcho won the 2018 NCAA Division I Golf Championship, and followed with winning the inaugural August National Women’s Amateur in 2019.

Kupcho spends much of her time with her putting coach, Jay Monahan, as the two married on Feb. 19; not Jay Monahan, the former commissioner of the PGA. Her husband is caddying this week for American Sarah Schmelzel, who is in a 10-way tie for 11th at 5-under.

“Honestly it’s all a blur. I mean, I hit the fairways, hit the greens, and really was just trying to put smooth putting strokes on them,” added Kupcho. That’s what I did, and they fell.”

Defending champion Patty Tavatanakit made six birdies to go along with four bogeys shooting a round of 70 to sit in second at 10 under. “I like chasing. Yeah, for sure. Better feeling,” said Tavatanakit. “You play without fear and I love doing that.”

Six-time LPGA winner and tour veteran Jessica Korda shot 67 Saturday to climb the leaderboard to third at 9 under.

“It’s a major so you know the girls up front are going to be nervous, and we’re kind of chasing them down and they know that,” said the Florida native. You always just kind of got to think that you have a chance no matter, and that’s kind of the mentality you got to go in there with.”

Korda had many near misses for birdie, as her ball-striking on this major course setup favors straight-hitting longer players.

“I love the grass. I don’t know, Palm Springs is so nice. I’m definitely really sad that we’re leaving,” added Korda. “It’s been really nice to be here. It’s going to be sad, but also we’re really looking forward to what the future has for this event.”

Overnight leader Hinako Shibuno dropped to 4 under after shooting 77, while Annie Park of New York slid to fourth place at 7 under, after a third round 73.

“I think I’m pretty good,” said Park. I think I was most worried about my putting and my putting was pretty solid today, so going into tomorrow I’m feeling pretty good.”

2014 Champion and Mission Hills fan favorite Lexi Thompson is tied for 5th place at 6 under, after a round of 71.

“Score-wise obviously I have to shoot like lights out, but honestly just overall enjoying every single step of being the last round out here,” said Thompson. Hopefully they can get another event out here because the community, the girls love it here, and just the fans absolutely adore this golf course and having us here.”

Last weeks’ winner at The JTBC Classic at Aviara, Atthaya Thitikul, is tied for 11th at 5 under after shooting a 69 in the third round.

In the first major of the year for the Ladies Professional Golf Association, Hinako Shibuno took a one-stroke lead Friday at The Chevron Championship, with a hotly contested leaderboard at Mission Hills Golf Course in Rancho Mirage, California. The 51st edition of the “The Dinah Shore Classic” will be the last as new sponsorship, Chevron, will move the tournament to Houston, Texas.

Having already won a major at the 2019 AIG Women’s Open Championship in her very first LPGA event, Shibuno shot the low round on the second day of 66, following her 69, for a total of 9-under. This is her second time leading at a major after 36 holes; the first was at the 2020 US Open where Shibuno eventually finish fourth.

From Japan, Shibuno grew up also playing baseball as the only female in her junior high baseball club before turning her attention completely to golf. From an athletic family, her parents competed in track and field, with her father throwing discus and her mother throwing javelin.

Known as “Smiling Cinderella” on the Japanese Tour, the light-hearted Shibuno initially felt that Mission Hills was a difficult course to play, but her strategy is working well.

“If I’m swinging harder on the tee shot and make more, decent shot on the second shot,” said the 23-year old Shibuno. It takes a lot of “power [to hit] from the rough.”

“My golf game is not a lot different than I won 2019 British Open, but my personality is not different at all,” added Shibuno. “I eat a lot more snacks.”

Tied for second at 8-under is the defending champion, Patty Tavatanakit of Thailand, shooting rounds of 67 and 69.

Following a brief, but very successful college career at UCLA with seven tournament wins, Tavatanakit was awarded the Women’s Golf Coaches Association (WGCA) and Pac-12 Freshman of the Year, WGCA First Team All-American, and All Pac-12 First Team member in her two years of college competition.

Her sole victory on the LPGA came at this venue last year, formerly ANA Inspiration, leading to her being awarded in 2021 with the Gaelle Truet Rookie of the Year and the Rolex Annika Major Award.

The 22-year-old Tavatanakit has stated that to succeed mentally, she needed to keep bad “demon” swing-thoughts from entering her mind.

First-round c0-leader from Colorado, Jennifer Kupcho, is also at 8-under with rounds of 66 and 70. The 24-year-old turned professional in 2019, and has won the 2020 Colorado Women’s Open.

From New York, Annie Park is also tied for second after opening rounds of 69 and 67.

Park had a very successful college career at USC, winning the Pac-12 Championship and the NCAA Championship in 2013; she won the individual title by six strokes at the NCAA Tournament and was named the winner of the Honda Sports Award as the best female college golfer in the United States.

However, Park took a two-month break from competition last year, stating “I was miserable on the golf course.”

After taking an “introspective” look at herself, she returned to tour playing the last four events and just barely qualified for this week’s major with a tie for 23rd at last weeks’ JTBC Classic at Carlsbad, California.

“It feels good to be back,” said Park. “I think last week was the first time I started to enjoy it again. Just not with golf, but just in general, like being able to see the spectators again and just having this newfound passion for golf.”

Other notables are tour veterans Allie Ewing, Lexi Thompson, and Jessica Korda. Ewing, of Mississippi, is tied at seventh along with Nanna Koerstz Madsen at 6 under.

Thompson, 2014 Champion, is in a seven-way tie for ninth with first-round c0-leader and major winner Minjee Lee of Australia, at 5-under.

“Obviously jumping into Poppie’s Pond is one of my best memories,” said Thompson. “Honestly just the atmosphere of this whole event in general. The fans really get behind it. The golf course is always in amazing shape for us. Mission Hills does it right.”

Jessica Korda jumped to 4-under total with a round 69; her #2 Rolex World Rankings sister Nelly Korda is reportedly out indefinitely having suffered a blood clot in her arm.

World #1 Jin Young Ko of Korea made the cut with three straight birdies to sit at 2-under.

Television coverage of this final major at Mission Hills “The Dinah Shore” will be on the Golf Channel Saturday and Sunday from 5 p.m. to 9 p.m. ET.