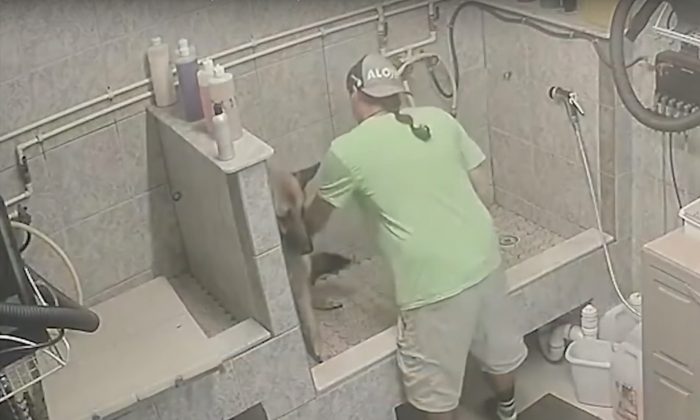 A sheriff issued a warning after what a dog groomer did German Shepherd that was captured on camera.

He issued a warning, “As I have said before…if you harm an animal in Brevard County we will take your butt straight to jail!!”

According to News 6 Orlando, James Cordell Doughty Suthann was arrested after the incident. He got angry and twisted the dog’s tail so hard that it broke.

“During a grooming appointment, Suthann became angry when an 8 year old German Shepard Service Dog would not stand still as Suthann was trying to complete the grooming process,” Ivey said. “(He) grabs the dog’s tail and completely lifts him off the ground causing the pet’s tail to be twisted a full 360 degrees and to be broken to the extent it could not be reattached.”

A dog groomer has been arrested after the moment he brutally broke a dog’s tail was caught on camerahttps://t.co/z6Md8nb8JA

He said the German Shepherd is a service dog whose owner is a disabled veteran for PTSD.

Ivey said that later, the dog, named “TT,” also had its head held down and couldn’t move. It was “obviously in pain,” he said.

Ivey told The Associated Press that the video is so graphic he won’t post it.

“(B)ut trust me when I tell you that it is one of the most difficult things I have ever had to watch in my 39 years of Law Enforcement because of the horrific and cruel way the pet was treated,” Ivey said, People reported.

Suthann also allegedly hit the dog in the back of the head with the showerhead.

“Because of the significant level of injury, ‘TT’ had to have emergency surgery to amputate her tail and is in the process of recovering,” Ivey wrote.

The owner of TT told Space Coast Daily that he found the groomer on the Internet, saying the facility had good ratings.

“I took her to the groomer’s for an appointment at 11 o’ clock in the morning and thought she was going to be in good hands,” said the owner, Rick McGuire, according to the news outlet. “When we went to pick her up, she was acting really funny.”

“I don’t think she really misses (her tail), as far as I can tell, but I really don’t know what’s in her head,” McGuire told WKMG ClickOrlando.