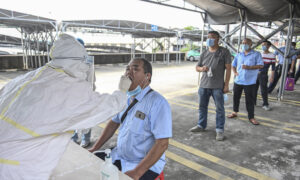 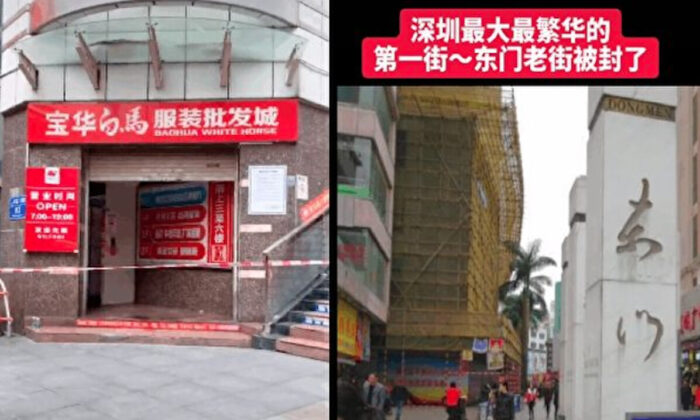 The COVID-19 epidemic in Guangdong province continues to worsen. The Epoch Times has learned that one of the busiest commercial streets in the megacity of Shenzhen has just been closed due to infection. Meanwhile, in the provincial capital of Guangzhou city, food and medicine shortages have been reported in locked-down areas.

On June 2, posts about a COVID-19 case in the Baima clothing wholesale market in Luohu District, Shenzhen, were circulating on Chinese social media. They said that the customer was a visitor from Guangzhou. It has caused a major commercial street—the East Gate Pedestrian Mall where the clothing market is located—to be closed down.

A shop owner in the East Gate Pedestrian Mall told The Epoch Times that the commercial street has a large number of visitors, and now all shops on the street have been required to close, with all customers told they have to get tested for COVID-19.

The Epoch Times obtained a video showing the commercial street in locked down.

The actual number of infected people and the true scale of the pandemic in China still remain unclear. The large-scale lockdowns and testing have caused many residents to suspect the officially reported infection numbers given the Chinese communist regime’s history of downplaying or covering up crises.

A netizen posted on Twitter that his friends in Guangzhou had told him that many cases were not being officially reported but that locals could tell that the situation was more severe than authorities were admitting from the semi-locked down state of the city and the Chinese Communist Party (CCP) central authorities sending a special epidemic team to visit Guangdong on May 30.

On June 2, 38 areas in Guangzhou were put under lockdown, with outbound travel restricted.

Some are also doubting the effectiveness of Chinese-made COVID-19 vaccines against variants reported in the outbreak cases.

According to Chinese state-run media, as of May 31, 10.11 million people in the city of 15.3 million have received their first vaccine, and another 3.25 million are fully vaccinated with two doses.

A staff member from the Shenzhen Municipal Health Commission told The Epoch Times on May 25 that Shenzhen residents were receiving the China-made CoronaVac and Sinopharm vaccines. They said that, like the non-Chinese vaccines, vaccination doesn’t guarantee full protection from COVID-19. They declined to comment on the efficacy of Chinese vaccines against COVID-19 variants.

The director of China’s Center for Disease Control and Prevention, Gao Fu, also said of the recent outbreak that the vaccines are not used for preventing infection but to prevent severe symptoms and death. He said earlier that a third dose of the Chinese-made vaccines might needed to boost its efficacy. He also suggested mixing vaccines of different technologies, such as inactivated virus vaccines and mRNA ones.

On June 2, a number of posts were circulating on social media about the chaos and difficulties facing citizens in locked down areas of Guangzhou.

Residents in Jushu Village in Liwan District told The Epoch Times on June 2 that there was no notice before the sudden lockdown of their village on May 28. People went to work in the morning and found out that they could not leave the village. It’s been six days, and food, medicine, and formula milk for babies are severely lacking.

Zhao Li (alias) said that all stores in the village are out of stock, and things can’t be shipped in. People can only buy over-priced rationed food packages provided by the CCP’s village committee.

A Jushu villager posted on social media, “So far, 90 percent of us have not received the so-called free food and supplies provided by the authorities. Now, the village committee has started to drive up prices for the rationed food, and many people trapped here cannot afford the high-priced vegetables. The boxed lunches that cost 15 yuan ($ 2.3) before are now selling for 60 yuan ($ 9.2).”

Wang Hua (alias), another villager in Jushu, told The Epoch Times that up to now, the CCP’s village officials have not effectively arranged food supplies for the community. She said, “They just lock us in here, and don’t care if we are alive or dead. Many tenants who don’t usually cook have no preparations, and now they only have porridge and snacks to stay alive.”

She added, “I thought that after a whole year of fighting the epidemic, the state would not let me come to the situation that I have no food to eat, so I didn’t stock up much. However, I’ve found out that the supermarkets and food markets have all been closed. And nobody has ever told me where I can buy food and how can I get basic supplies. I can only depend on myself.”

Wang revealed to The Epoch Times that the shortage of medicine is another serious problem facing lockdown areas. She said that her friend’s husband’s feet were ulcerated, bloody, and in need of urgent medical assistance. They had called emergency services, hospitals, pharmacies, and all other official channels but have received no help. When they tried to buy medicine online, their order got canceled, as no deliveries are being allowed in the lockdown areas. Later, they posted to a group chat on social media asking for help. Someone in the group had a similar symptom and shared his medicine with them.