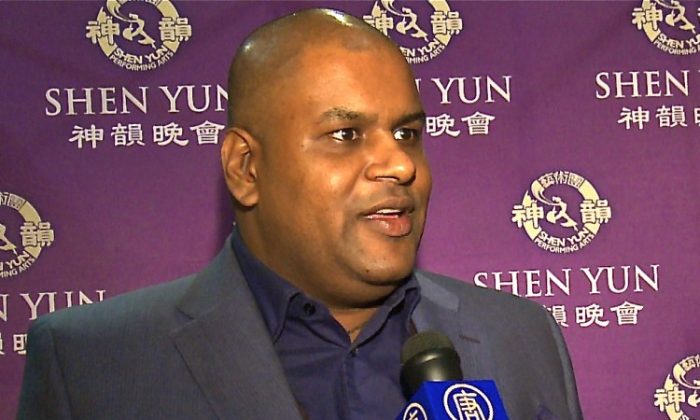 Tenor Marcus Saroop said Shen Yun Performing Arts was among the best productions he had ever seen. (Courtesy of NTD Television)
News

MISSISSAUGA, Canada—Tenor Marcus Saroop, attended Shen Yun Performing Arts at the Living Arts Centre on Dec. 22. Mr. Saroop, who has been involved in opera and the performing arts since childhood, said Shen Yun was among the best productions he had ever seen.

Mr. Saroop noted that he has sung with live orchestras worldwide, and this year he sang with world-renowned Spanish tenor and conductor Plácido Domingo on tour a number of times, mainly in North and South America.

He said Shen Yun’s vocal and instrumental performances were “perfect” and some of his favorite moments of the show.

“It’s been gorgeous. The messages, the sound, everything’s been perfect and it’s been glorious,” he said.

The performance features a collection of stories told through classical Chinese dance as well as ethnic or folk dance, and vocal soloists.

“They have great skill,” he said. “The Chinese singers have been incredible.”

According to the Shen Yun website, the vocalists use bel canto vocal technique while singing Chinese lyrics, a feat that is “highly-difficult” and “unparalleled” in the music world today.

Though the songs are sung in Chinese, Shen Yun’s digitally animated backdrops project the lyrics behind the performer in English, to allow diverse audiences a deeper understanding of the song’s meaning.

All music and lyrics are also original compositions written by Shen Yun artists, according to the website.

“I don’t know how they got all this great production value,” said Mr. Saroop. “It’s just gorgeous. Everything works so well together—how they sing live and also with the graphics—the graphics are just incredible.”

“The continual music, the orchestration, I enjoyed that a lot,” he said.

“The show was presented beautifully, the music was wonderful and all the different cultural dances [were] spectacular.”

Mr. Saroop said everyone should see Shen Yun because its beauty has a universal appeal that transcends culture and race.

With reporting by NTD Television and Justina Wheale.