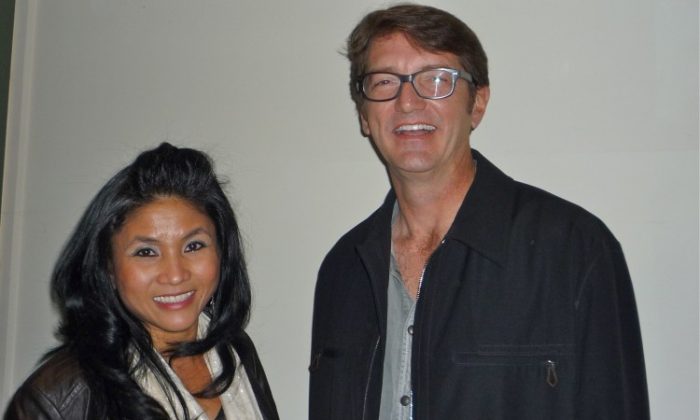 Michael Smith, who was in the third row with his companion for the evening, Graciana Bhoree, at the California Center for the Arts. (Jane Lin/The Epoch Times)
News

New York-based Shen Yun has as its mission reviving the 5,000 year old, divinely inspired Chinese culture, according to the company’s website.

“Sophisticated dance techniques, an orchestra joining instruments East and West, beautiful costumes, and a stunning back drop—this is Shen Yun at first glance,” the website states. “But digging deeper, one discovers a sea of traditional Chinese culture. Mortals and divine beings merge on stage as one. Principles such as benevolence and justice, propriety and wisdom, respect for the heavens, and divine retribution, all come to life, washing over the audience. Originating from Confucianism, Buddhism, and Taoism, these ideals are the essence of traditional Chinese culture.”

“I thought it was thoroughly entertaining and educational, too,” said Michael Smith, vice president of operations for an electronic company. “I learned a lot about the Chinese culture that I didn’t know.”

The combination of music and dance go together “very, very well,” said Smith, who was in the third row with his companion for the evening, Graciana Bhoree.

Several dance pieces in Shen Yun depict the modern day situation in China through showing the persecution of the meditation group Falun Gong, also known as Falun Dafa. Falun Dafa is guided by the principles of truthfulness, compassion, and tolerance, according to Shen Yun’s website, and “has helped over a hundred million Chinese people understand and return to the essence of traditional Chinese culture—Confucian, Buddhist, and Taoist schools of thought.”

But because the ideology of the communist regime is “in stark contrast with the traditional culture of China,” the regime targeted Falun Gong for persecution in 1999, and has continued “a ruthless and systematic campaign” since then.

Smith said he was touched by the pieces that depicted the persecution of Falun Gong.

“That was pretty touching, to see that happening and not really know that that was going on,” he said.

Overall, Smith enjoyed the entire performance. “I was really amazed,” he said. “I really loved it.”

At the core of Shen Yun are dancers, who are trained in the highly difficult classical Chinese dance. The dance system has a long history of thousands of years and entails training in movements and postures, “as well as very difficult jumping and tumbling techniques,” according to Shen Yun’s website.

“And so, alongside ballet, classical Chinese dance is one of the most comprehensive dance systems in the world.”

Roy and Angie Dillard saw the performance on Saturday as well and loved what they saw.

“I love the way they move,” said Mr. Dillard, an analyst with Cal Trans. He enjoyed the Mongolian Bowl Dance and the dance called Ancient Elegance, in which “The silvery notes of a flute gently beckon a group of fairies to dance,” according to the program book.

The costumes adorning the dancers are what caught Mrs. Dillard’s attention.

“The costumes were beautiful,” she said.

The interplay between the costumes and the digital backdrops produce a harmonious arrangement of colors, one that Mrs. Dillard appreciated.

“Those colors are unique to here; you don’t see those hue’s very much,” she said.