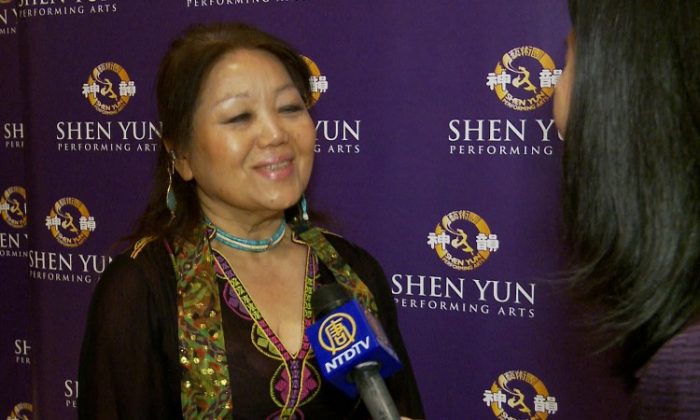 “It was like heaven,” she said. “It’s like you are really coming from heaven to the stage.”

The New York-based company travels the world with the best classical Chinese dancers to revive legends and culture from 5,000 years of history. The Chinese have always believed their traditional culture is divinely inspired; Buddhas and Daos figure prominently in their art and performance.

Burmese Princess Ying Sita said that Chinese dance and culture is spreading globally and predicted it will continue to do so.

“I think this is a worldwide thing,” said Princess Sita. “It is going all over the place. It is lovely … I think all over the world, it will be very popular.”

John Selloni, owner of transportation company Century Carriers, liked the color of the dances and was moved by the message he perceived.

A dance titled The Choice, depicts the agonizing separation of a young couple due to the Chinese regime’s persecution of spiritual groups in China. “I liked ‘The Choice’ because it showed good and evil, and goodness prevails over evil,” said Selloni’s wife, Maria.

Rebecca Tabajovich Even-Zohar, a member of the National Art Club and former UN interpreter, praised “The colors, [and] the combination of technology, the music, [and] the art.”

“It’s really perfect, and it is obviously something quite exceptional,” said Leonardo Gasparini, Artistic Director of Palacio de la Cultura y la Communicación in Guadalajara, Mexico. “The music I liked very much, the mixture between the traditional elements and classic ones,” said Mr. Gasparini.

The Shen Yun Orchestra combines Chinese traditional instruments, which lead the melody, with Western classical instruments providing the foundation. The orchestra harmonizes with the digital backdrop and the movements of the dancers.