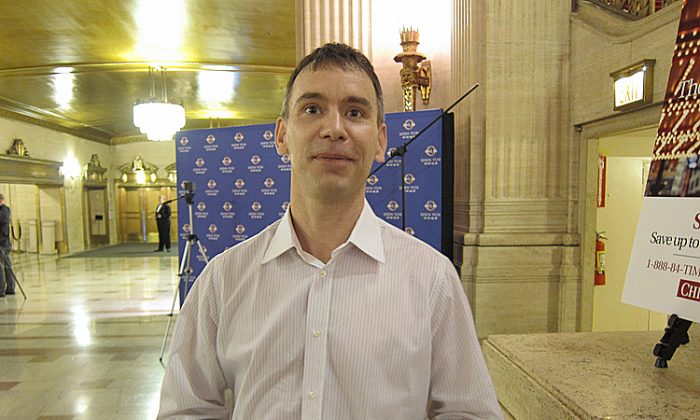 CHICAGO—Robert Parks is an electrical engineer by trade and studied Chinese martial arts for over 20 years so when he saw Shen Yun Performing Arts at the Civic Opera House in Chicago April 22, it resonated.

“I loved it,” he said.”Its a really nice, uplifting positive message.”

Shen Yun, a New York based performing arts company, is dedicated to restoring China’s five thousand year culture, all but wiped out in China after 60 years of communist rule.

Mr. Parks studied Northern Shaolin and Eagle Claw martial arts, and he was open to the cultural elements in Shen Yun.

“I’m open to different philosophies and things like that, so it’s not a reach for me at all, I can connect with that,” he said.

His martial arts training had given him an eye for the details in Shen Yun dance. He noted the costumes, the stance or “bearing” of the dancers, the choreography and the overall presentation, all of which had impressed him.

“Really nice,” he said, “the postures are really top notch, great athleticism … the composition is fantastic.”

Classical Chinese dance has a long history in China, passed down within the imperial palace and ancient Chinese theater and opera, to “become a complete system of dance embodying traditional aesthetic principles with its unique dance movements, rhythms, and inner meaning,” the Shen Yun website says.

For Mr. Parks, Shen Yun music was a new experience. The company’s orchestra with its 40 member mix of Eastern and Western classical musicians is unique in the world.

“The music resonates, it’s really nice,” he said. “It just has a real positive energy to it, it’s real uplifting and has a sweet sound to it.”