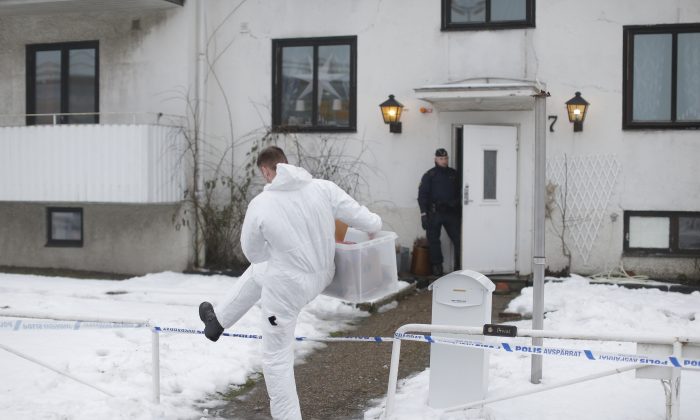 A forensic police officer carries a box of evidence following a search in front of a migrant center in Molndal outside Goteborg, Sweden, Monday, Jan. 25, 2016. A female employee was killed in a knife attack inside the migrant center. (Adam Ihse/ AP Photo) SWEDEN OUT
Europe

‘She Was My Angel:’ Heartbroken Mother of Refugee Worker Stabbed by Asylum Seeker Speaks Out

The heartbroken mother of the young refugee worker who was stabbed to death at the asylum shelter she worked.

Alexandrea Mezher, 22, was working alone with ten youths aged between 14 and 17 when she was attacked at the home for unaccompanied young migrants in Molndal, near Gothenburg.

She later died of her injuries in the hospital.

Chimene Mezher, her mother, spoke out for the first time on Tuesday, saying: “She was not just my daughter, she was my angel.”

“She was my air, she was my everything, why her?” Mezher told GoteborgsPosten.

“She was a just and fair human being. There were so many who loved her. She was my daughter, my friend… my mate.”

Swedish news agency TT says the suspect is a 15-year-old male. His country of origin has not been disclosed. Seven witnesses to the crime were also interviewed.

Mezher was the daughter of immigrants, with her parents moving from Beirut to Sweden decades ago, reported the Daily Mail.

Police took care to praise other migrants for stopping the attacker, saying two of the residents overpowered the youth by the time police arrived.

“It says in the police report on the event that two guys held him down. That’s an extremely good intervention,” police spokesman Peter Adlersson told Expressen newspaper.

“If he had been planning to injure more people, they prevented it. It’s very easy to get wounded oneself if one intervenes in this way. We are extremely grateful for those who did this.”

But Mezher’s cousin blamed elected officials, for allowing the wave of migrants into the country.

“It is so terrible. She was a person who wanted to do good, who wanted to be good,” the cousin said. “And then he murdered her when she was doing her job. We have cried a lot. She was such a nice person, warm and happy. It is the Swedish politicians’ fault that she is dead.”

“These kinds of calls are becoming more and more common. We’re dealing with more incidents like these since the arrival of so many more refugees from abroad,” he said.

“”It was messy, of course: a crime scene with a lot of blood.”

Sweden’s Prime Minister, Stefan Lofven, rushed to the scene to try to allay concerns about immigrants.

“I believe that there are quite many people in Sweden who are very concerned that there may be more cases of this kind, when Sweden receives so many children and youths arriving alone,” he told Radio Sweden.

Jonas Hinnfors, politics professor at Gothenburg University, told the Telegraph that Lofven’s decision to rush to Molndal showed the difficult situation the government was facing.

By coming here, he is showing that this is something that the government and the Social Democratic party are taking seriously.This is perhaps to dilute a little bit the criticism that the establishment have tried to cover up what people claim to be the real facts about crime and immigration,” he said.

“The dilemma is of course that, by moving onto that turf, he plays into the hands of the immigration-critical parties, because he’s doing things, debating things, which normally aren’t on the Social Democratic agenda.”