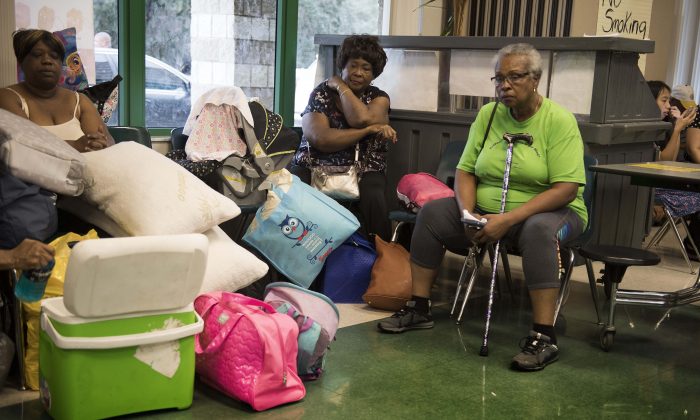 A group of women sit in the cafeteria awaiting room assignments at a shelter within the Pizzo Elementary School in Tampa, Florida where Tampa residents are fleeing the evacuation zones ahead of Hurricane Irma's landfall Sept. 9, 2017. (JIM WATSON/AFP/Getty Images)
News

‘She Can Barely Walk’: Evacuating for Irma More Difficult for the Elderly

ESTERO, Fla.—Sheryl Estes lay in a foldable lounge chair, wrapped in blankets and surrounded by a sea of mattresses, storm refugees and their dogs. Her husband, Rick, squeezed in beside her, between an animal crate and a trash can.

Estes was among thousands of Florida evacuees who streamed into Germain Arena, a sports and concert venue in the state’s southwest corner, seeking shelter from Hurricane Irma. They included a large contingent of elderly and medically frail residents of one of the world’s premier retirement destinations.

Estes, 60, had been released from the hospital days earlier. Her home health aides had stopped coming by the house because of the impending storm. She struggles to speak and walk following a car accident, dozens of surgeries and a bout with gastroparesis, a stomach condition.

The shelter offered hot dogs but no medical care.

“It’s difficult to be here in the condition she’s in and with all the medicine,” said Rick Estes, 64.

The large population of elderly residents in South Florida is posing a severe test for officials scrambling to respond to one of the most powerful storms to ever threaten the state.

How emergency responders mobilize to care for senior citizens could have a profound impact on the number of deaths and injuries Irma claims when it makes its landfall on Sunday. The storm has killed at least 22 residents of islands along its destructive path.

The elderly are particularly vulnerable in storms and floods, especially those who live alone, suffer from chronic medical conditions or face physical and mental disabilities, experts said. A 2008 study of deaths from Hurricane Katrina found that nearly half of a representative sample of victims were older than 75.

Florida has among the highest concentrations of senior citizens in the nation. The U.S. Census Bureau estimates there were more than 1.6 million people who were at least 75 years old in Florida in 2015, and it considers almost half of them disabled.

The Estes fled their home in Cape Coral on Saturday after the hurricane tracked west and state officials warned of storm surges as high as 15 feet along parts of the coast.

When Sheryl Estes needed to use the women’s bathroom, Rick helped her to the entrance, carefully braced her hand against the wall and waited as she went inside.

The demand for shelters along the west coast of Florida on Saturday quickly overwhelmed the available facilities, staff and resources, leaving authorities scrambling to accommodate the human tide flowing into an expanding number of shelters.

Jack and Mary Jo Shively, 85 and 78, were turned away from three shelters at public schools and waited for hours before finally getting into Germain Arena.

The arena had quickly filled – and would close to new evacuees by the end of the day, having already taken in more than 5,000 people. Late Saturday afternoon, it seemed about a third of the people there were senior citizens, many of them in wheelchairs.

Though older residents typically need the most help, they are often also the most resistant to leaving their homes and seeking shelter.

Jack Shively had at first fiercely resisted leaving his home in a nearby retirement community.

“I’ll sit right here and ride this out,” he told his wife earlier in the day.

Mary Jo Shively finally convinced her husband to leave with the help of their daughter, Jackie Cumo, who had flown in from Philadelphia to safeguard her parents.

“I got out-voted,” he said as he watched the shelter’s population swell. “I don’t think I can sit here all night, but I guess I’ll have to.”

Other older residents who came to the shelter decided they couldn’t stand it.

Eileen Jirak, 83, stood on the corner in the afternoon, complaining about the shelter’s conditions and waiting for a friend to help her relocate back to her nearby home.

“It’s like hell in there,” she said, “and people keep coming. At home, at least I won’t go out of my mind sitting up in those bleachers.”

Eileen Car, 74, had left her home in Naples with her 17-year-old niece and her dog, Muffy, after her brother convinced her that her ground-level apartment could flood. By Saturday afternoon, Car was hungry and discouraged.

“I had to eat chocolate pudding with my fingers,” said Car. “This is a disaster. I’ll never do this again. I’d rather drown.”

State police Lt. Greg Bueno, a public information officer, arrived at the arena Saturday morning to find only two troopers assigned there. He quickly recruited nearly 20 more to help with the lines of people that snaked around the building and the parking lot.

By mid-afternoon, the shelter was near capacity of 5,000. An anxious volunteer came to give Bueno the latest on the shelter’s growing population. “There’s nowhere to put them. They just keep coming.”

The shelter would start turning people away later that evening. Troopers and others had been tending to a large concentration of elderly people in the shelter all day.

“We pulled so many people up in wheelchairs,” Bueno said. “The elderly, their anxieties are just super-high.”

That morning, Bueno had to convince his own reluctant parents leave their home in Cape Coral to his home on much higher ground, but not without resistance.

“Their home is everything to them,” he said. “But my mother needs a permanent oxygen supply. Finally, they made the right decision – and relieved a lot of my anxiety – but it took a lot of convincing.”

To Ken Paszek, 60, evacuating was a no-brainer. He knows he lives in a flood prone area near Naples, and just last month had been transfixed by the images of homes destroyed and people stranded by Hurricane Harvey in Texas.

“That scared the crap out of me,” he said as he waited for hot dogs in a seemingly endless line inside the arena. “It was the biggest reason I decided to leave.”

By Robin Respaut and Brian Thevenot