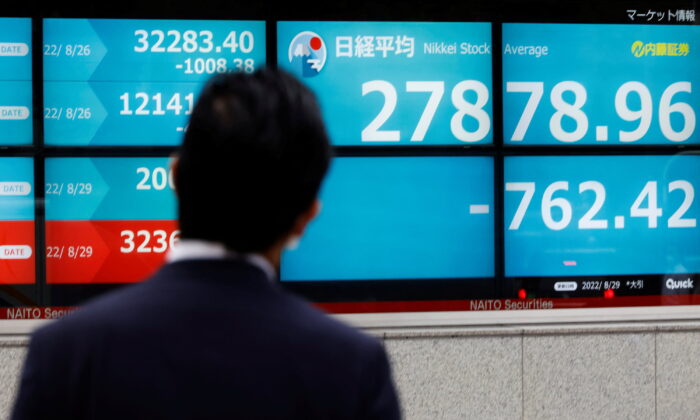 A man looks at an electronic board displaying Japan's Nikkei index outside a brokerage in Tokyo, Japan, on Aug. 29, 2022. (Kim Kyung-Hoon/Reuters)
Stocks

HONG KONG/LONDON—Shares crept up slightly and bonds held steady on Tuesday as investors awaited the next round of likely gloomy inflation data while also juggling concerns about Europe’s energy crisis, a looming recession, and more rate hikes.

U.S. shares looked set to follow suit with S&P futures up 1 percent as markets recovered from a round of selling following hawkish remarks by Federal Reserve Chair Jerome Powell at the Jackson Hole conference last week.

Eurozone government bond yields were little changed as traders awaited the latest policy signals and this week’s inflation data, following a start to the week in which yields soared after a round of policymaker warnings about inflation.

Germany’s 10-year yield traded at 1.496 percent, unchanged on the day but close to the two-month high reached on Monday of 1.548 percent.

Besides interest rates, the health of China’s economy is also at the forefront of investor concerns. China’s benchmark Shanghai Composite Index shed 0.6 percent on news that several big cities had ramped up COVID-19 restrictions.

Hong Kong’s Hang Seng was also dragged 0.37 percent lower as investors started walking back their enthusiasm about an agreement struck between China and the United States for access to Chinese companies’ audit papers.

At the Jackson Hole conference, the Fed’s Powell and European Central Bank speakers flagged the need for bolder action to tackle inflation, driving selling of bonds and equities as traders jacked up near-term interest rate expectations.

“The markets’ focus for the next couple of weeks, at least, will be the likely Fed action,” said Manishi Raychaudhuri, head of APAC equity research at BNP Paribas.

“Earlier, there was talk of a pivot to a possible cutting of interest rates by the Fed, maybe in 2023 second half or so, but that is now sort of falling by the wayside,” he said.

“Higher for longer (interest rates) is possibly the kind of narrative that’s building up.”

Futures markets have odds of better than two-thirds that the ECB raises rates by 75 basis points in September, and see about a 70 percent chance that the Fed does likewise.

U.S. non-farm payrolls data are due on Friday, and markets may not like a strong number if it supports the basis for a continuation of aggressive rate hikes.

Ahead of that, German inflation figures due at 1200 GMT on Tuesday and China’s manufacturing survey due on Wednesday will be closely watched.

U.S. Treasuries settled down on Tuesday morning. The two-year yield fell to 3.413 percent, after rising as high as 3.489 percent on Monday, its highest since late 2007.

Benchmark 10-year yields also fell to 3.0521 percent, down from 3.13 percent on Monday. Gilts will likely face pressure when British markets return on Tuesday from a holiday on Monday.

The U.S. dollar steadied after an overnight dip, though the euro was attempting to regain parity, helped by ECB hike bets and a cooling of gas prices.

Rodrigo Catril, a strategist at National Australia Bank, said the euro would be tested by the upcoming inflation numbers in the eurozone, the jobs data in the United States, and Russian cuts to gas flows later in the week.

“The European story is actually all about the economic outlook … No energy means no growth,” he said, adding it would not be a surprise if the euro fell back to $0.96.

Oil mostly held gains on the prospect of output cuts, as traders look ahead to a producers’ meeting on Sept. 5. U.S. crude dipped 0.4 percent to $96.59 per barrel and Brent crude fell to $104.8.

Gold prices fell slightly as the precious metal continued to wilt in the face of the strong dollar, with spot gold last traded at $1,736.52 per ounce.

By Xie Yu and Lawrence White