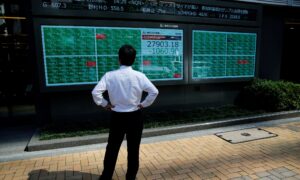 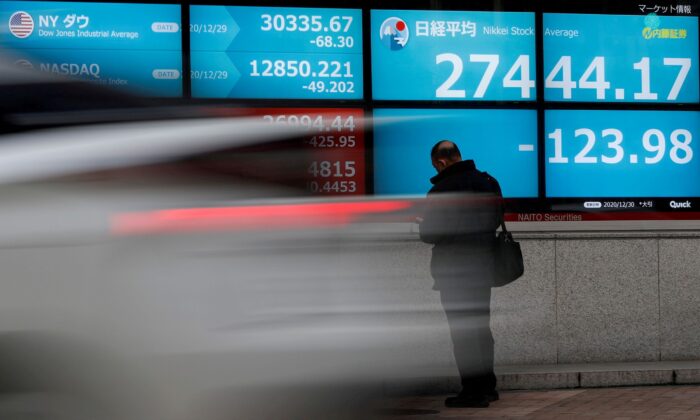 A man stands in front of a screen displaying Nikkei share average and the world's stock indexes outside a brokerage, amid the coronavirus disease (COVID-19) outbreak, in Tokyo, Japan on Dec. 30, 2020. (Issei Kato/Reuters)
Markets

LONDON—Global shares fell for a third successive day on Tuesday, while bond yields on both sides of the Atlantic soared on anxiety over when central banks might raise interest rates.

MSCI’s All Country World Index, which tracks shares across 49 countries, was down 0.3 percent on the day after the start of trading in Europe.

Surging yields pressured high-growth technology shares at the start of trading in Europe while fresh signs of a slowdown in China’s economy also weighed on investor sentiment, pushing the pan-European STOXX 600 index down over 1 percent.

“The global equity market is having difficulties rising in a wall of worries as the energy crunch and re-pricing of the U.S. (and EU over the month) is potentially changing the timing and speed of future rate increases or at least tapering,” said Sebastien Galy, senior macro strategist at Nordea Asset Management.

Rising yields also boosted the dollar, with the index that measures the greenback’s strength rising to a five-week high. The Japanese yen fell against the dollar and the euro as rising yields made the currencies more attractive to Japanese buyers.

Earlier in Asia, shares were mixed across regions as the fallout of Chinese property developer Evergrande’s debt crisis and a widening power shortage in China weighed on sentiment.

Australia’s benchmark S&P/ASX200 index closed 1.47 percent lower, led by a sell-off in healthcare and technology stocks, while Japan’s Nikkei was down 0.2 percent after halving its initial losses.

During Asian trade, Brent crude oil hit $80 a barrel for the first time in three years, driven by regional economies beginning to reopen from the COVID-19 pandemic and supply concerns.

Some ‘positive News’ in Property Sector

“There has been positive news for the property sector, and markets are digesting that after all of the negative news flow of the past few days,” Tammy Leung, Everbright Sun Hung Kai strateigst said.

Investors remain on edge over the future of Evergrande, which failed to meet a deadline to make an interest payment to offshore bond holders.

Evergrande has 30 days to make the payment before it falls into default and Shenzen authorities are now investigating the company’s wealth management unit.

“What we see in China with the developers and the blackouts is going to be a negative weight on the Asian markets,” Tai Hui, JPMorgan Asset Management’s Asian chief market strategist told Reuters.

“Most people are trying to work out the potential contagion effect with Evergrande and how far and wide it could go. We keep monitoring the policy response and we have started to see some shift towards supporting homebuyers which is what we have been expecting.”

“Markets have been jittery amid focus on China’s regulatory clampdown and the prospect of the Federal Reserve tapering its asset purchases,” BlackRock Investment Institute said in its global weekly commentary.

“We believe the path for further gains in risk assets has narrowed after an extended run higher, warranting a selective approach, but we reaffirm our tactical pro-risk stance.”

It said it was shifting its view to a ‘modest’ overweight in Chinese assets, in the context of very small client allocations to the asset class.