Shareholders Getting Fed Up With Underperformance by ‘Woke’ CEOs 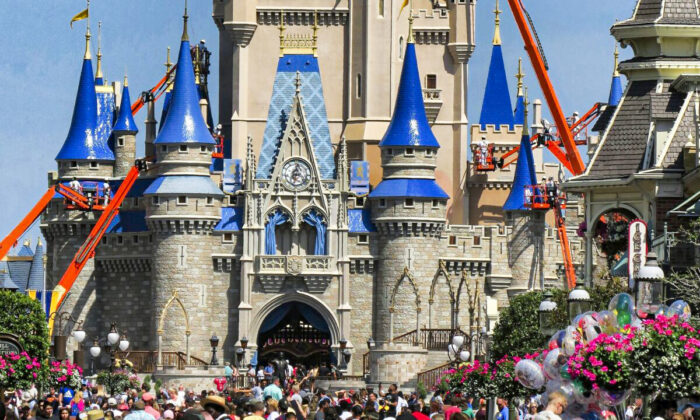 A crowd is shown along Main Street USA in front of Cinderella Castle in the Magic Kingdom at Walt Disney World in Lake Buena Vista, Fla., on Mar. 12, 2020. (Joe Burbank/Orlando Sentinel via AP)
By Kevin Stocklin

The Walt Disney Company may prove to be a cautionary tale for CEOs who have sworn allegiance to the environmental, social, and governance (ESG) movement.

While it has become increasingly common for global clubs like the World Economic Forum and activist asset managers to pressure corporations to fall in line with the ESG agenda, Disney is now feeling the heat from the opposite direction: shareholders who want the company to focus on sales and profits, as well as its lagging share price.

Vivek Ramaswamy, founder and chairman of Strive Asset Management, told The Epoch Times that “Disney unnecessarily waded into a fraught political debate and hurt its business interests as a result.”

“It’s no surprise that shareholders are frustrated and now speaking up,” he said. “Other CEOs should learn their lesson: focus on excellence over politics.”

As a shareholder, Ramaswamy informed Disney in September 2022 that “over the last year, the Walt Disney Company’s public approval rating plummeted from 77 percent to 33 percent—an unprecedented collapse following Disney’s public embrace of controversial political positions in deference to social activists.”

Disney started a political battle with the state of Florida last spring in which Disney vowed to fight to overturn a parents’ rights law that banned the teaching of sexual content in kindergarten through third grade, while also proclaiming its “not-at-all-secret gay agenda” of “adding queerness” into children’s shows. In March 2022, Disney also vowed to fight a Texas effort to investigate transgender surgeries on minors for potential child abuse violations.

Disney’s political campaign quickly heated up, with Florida Gov. Ron DeSantis hitting back in public statements and ultimately eliminating the privileged self-governing status of the massive Disney World theme park outside of Orlando. Protests from both supporters and critics of Disney CEO Bob Chapek ensued, with some families boycotting Disney products. Conservative and religious employees published an anonymous letter, claiming that “the Walt Disney Company has come to be an increasingly uncomfortable place to work for those of us whose political and religious views are not explicitly progressive.”

Despite firing Chapek, Disney stock has yet to recover. It is currently down more than 21 percent over the past year, compared to an approximate 8 percent decline in the S&P 500 Index over the same period. And some shareholders now appear to have had enough.

Legal and Investor Headaches for Disney

One large shareholder recently brought a lawsuit against Disney’s management, stating that their political agenda has created “far-reaching” financial risks for the company. In a 22-page filing last month, investor Kenneth Simeone charged that “the financial repercussions from Disney’s actions, and resulting harm to the company and its stockholders, have been swift and severe.” Simeone demanded that management hand over records regarding its decision to fight Florida’s parents’ rights law as a possible precursor to further legal action against Disney executives.

Two other large and dissatisfied stockholders, Nelson Peltz and Dan Loeb, known as aggressive shareholder advocates, are also putting heat on Disney. Peltz has demanded a board seat to help the company right itself, which current management has so far refused. Peltz is known for his role in forcing GE’s management to break up what had been the world’s largest conglomerate into three component parts 2021, in order to boost the sagging stock price.

In April, Reed Rubinstein, a former U.S. deputy associate attorney general and current senior counselor for America First Legal, penned a letter to Disney’s board on behalf of shareholders that demanded an investigation into the “wasting of corporate assets,” including the tarnishing of Disney’s trusted reputation for creating G-rated children’s entertainment, as well as potential violations of employees’ civil rights.

Rubinstein demanded that Disney’s board explain to shareholders its rationale for policies, including “why the company supports lessons on sexual orientation for five-year-old children, while simultaneously opposing parental notification,” and how “adding queerness to children’s programming will enhance the company’s reputation.”

Increasingly, CEOs who had once eagerly supported the ESG movement now appear to be having second thoughts. According to a survey of CEOs by management consultancy KPMG, half of all corporate leaders say they are now rethinking or halting their ESG initiatives as economic conditions become more difficult.

Poll: Americans Don’t Much Think Much of the ESG Agenda

Further, the more the public becomes aware of the goals and impact of ESG policies, the less they seem to like it. A recent poll on Twitter by its new owner, Elon Musk, asked whether the World Economic Forum, one of the key advocates of the ESG movement and state-corporate collaboration, should control the world. Of the 2.5 million who responded, 86 percent said no. According to a poll taken in April 2022, only 27 percent supported Disney’s position that discussions of sexual topics are appropriate in elementary schools.

ESG presents itself as a risk-management tool rather than a political ideology, but one risk it avoids mentioning is legal risk. Besides pushback from shareholders and customers, “woke” CEOs may also find themselves in trouble for violating U.S. antitrust and civil rights laws.

In addition, racial and gender quotas that are part of the social and governance component of ESG likely violate the Civil Rights Act of 1964, which prohibits discrimination on the basis of race, color, religion, gender, and national origin. Many states also have similar civil rights laws, and in December California’s Court of Appeals ruled that a decree setting gender quotas on corporate boards violated state law.

Disney fired Chapek in November 2022, bringing back former CEO Bob Iger, who, while having a track record of progressive activism himself, seemed to indicate a change of direction.

“I was sorry to see us dragged into that battle, and I have no idea exactly what its ramifications are,” Iger told employees upon taking the helm.

In response, Gov. DeSantis told Fox News host Tucker Carlson: “We didn’t drag them in, Tucker. They went in on their own, and not only opposed the bill, they threatened to get it repealed.”

Disney did not respond to a request to comment for this article.