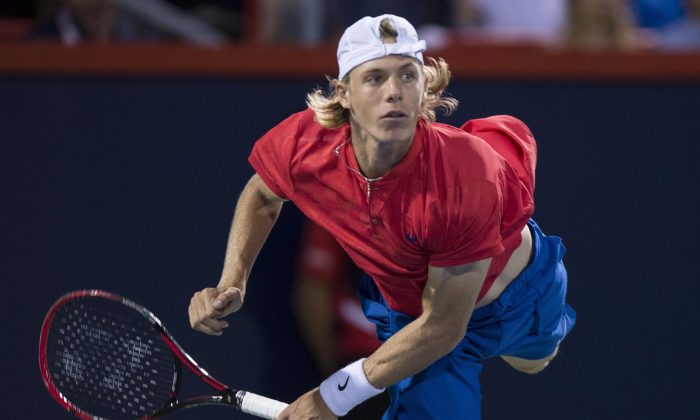 Canadian Denis Shapovalov hits a serve to Alexander Zverev of Germany in semifinal action at the Rogers Cup on Aug. 12, 2017 in Montreal. (The Canadian Press/Paul Chiasson)
Canadian Content

MONTREAL—Denis Shapovalov stamped his name on the Canadian sports landscape and tennis world after an incredible Rogers Cup run in which he became the youngest ever to reach a Masters 1000 event semifinal.

The 18-year-old’s unfathomable ride came to an end at the hands of another youngster—the red hot Alexander Zverev, 20—on Aug. 12 at Uniprix Stadium. Along the way, Shapovalov downed former U.S. Open champion Juan Martin del Potro, and one of the game’s legends in Rafael Nadal.

“It was a dream week for me. Obviously I didn’t expect it,” he said after his loss to Zverev. “Saved four match points the first round, just played loose after that, just went with it.

Shapovalov’s play earned praise from Roger Federer who watched his match against Nadal. Federer, now 36, described Shapovalov as fearless, a trait he had when he was getting started as a pro.

“It seems that Denis has an extra gear. I think he’s going to be a wonderful player,” Federer said after his quarterfinal victory on Aug. 11.

Zverev lauded his younger opponent for his fighting spirit and improved movement around the court. He always knew Shapovalov had solid groundstrokes and a good serve.

“I know what kind of player he is. He will never go away. He will fight, especially in front of the home crowd,” Zverev said referring to the final game of the match when Shapovalov had three break points and fought off two match points.

The meeting between the two marked the youngest semifinal on the tour since 2008. Zverev and Shapovalov agree they have a rivalry starting and the Rogers Cup semifinal was the first of many encounters to come over the next several years. The future in men’s tennis looks very bright.

Prior to his Rogers Cup run, if anything, most would probably remember Shapovalov for getting disqualified during a Davis Cup match against Great Britain in Ottawa in February. The then 17-year-old Shapovalov fired a ball in frustration that hit chair umpire Arnaud Gabas in the face. The Brits were immediately awarded the win and Shapovalov had to come to terms with his reckless act.

He immediately realized his error and said he focused on changing the way he behaves on court. “I’ve grown from it. I’m on a new chapter of my life,” he said.

Now, six months later, Shapovalov said the Davis Cup incident is in the past and that he’s grown from it. He took responsibility for his actions, condemned his own lack of professionalism, and is mentally stronger for having gone through it.

“Davis Cup incident or not, that was one of the main focuses we had for the year, just to improve mentally,” Shapovalov said. He credits his coach and Davis Cup captain Martin Laurendeau for steering him in the right direction. Laurendeau took the hard questions from the media in February after Shapovalov read a statement and left distraught.

He was ranked No. 234 at the time of his Davis Cup error, but will rise to No. 67 after his Rogers Cup run.

Shapovalov presents something different and exciting in tennis. Not too many players are left-handed and even fewer use a one-handed backhand. The shot is a thing of beauty and the young Canadian struck a number of scintillating winners with it during the tournament.

Canada Pushes Great Britain to the Limit in Davis Cup

He remembers the day he went with the one-hander. He was practicing a two-hander with his mother and found he was letting go with his second hand.

“It was natural to me to play one-handed. My father just suggested to my mom to try, just hit a couple of one-handers,” he said.

For now, Shapovalov said he’d continue to mix in tour events with the smaller events to ensure he picks up ranking points and plays some matches where he’s actually expected to win.

“A mix of both would probably be the best thing for me at this point in my career,” Shapovalov said.

With winning the junior Wimbledon title last year, his victory over 15-time major winner Nadal on the way to a Masters 1000 semifinal berth, Shapovalov has the makings of a top-10 player. And who knows what more.

It was a life-changing week for the young Canadian.