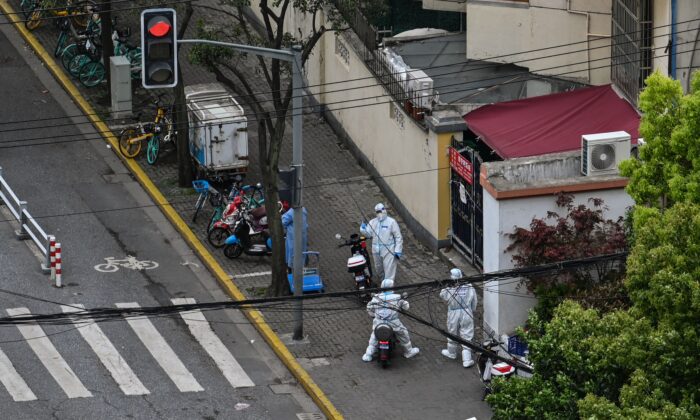 Policemen in personal protective equipment stand next to the entrance of a neighborhood during a COVID-19 coronavirus lockdown in the Jing'an district of Shanghai on April 15, 2022. (Hector Retamal/AFP via Getty Images)
INSIDE CHINA

Shanghai residents are continuing to reel under strict lockdown conditions brought on by the regime’s Zero-COVID policy, with many concerned how it will affect the economy.

The lockdown has been ongoing for many of the city’s 26 million residents for nearly three weeks. A city-wide lockdown was announced on April 3.

Shi Lei (pseudonym) lives in a “closed control area” due to several positive Omicron cases found in her neighborhood. She is unable to go to her workplace for one of China’s leading companies.

“If this goes on, the private sector will not be able to hold on, and we will definitely lose our jobs,” Shi told The Epoch Times. “We already have a tight cash flow.”

Even if it is a so-called precautionary area, strict COVID prevention rules are in place.

Wang Hao (pseudonym), an emergency relief instructor living in Puxi district, said what was occurring does not heed well for Shanghai’s position as China’s economic center.

“It won’t just be about the unemployment of the city’s white-collar workers, but a question of how many years the whole country’s economy will be set back,” Wang told The Epoch Times on April 11.

Despite the strict control measures, Omicron cases are said to soaring with the Shanghai Health Commission announcing that more than 200,000 people have been infected.

The vast number of cases are asymptomatic, something not missed by Wang.

The ongoing prevention curbs can be regarded as “just a game, a political campaign,” he said.

The authority’s measures won’t be effective as they neglect the rules of both medicine and economics, he said.

China’s health committee released daily data on April 14, claiming that there were 3,486 new confirmed cases, no reported severe cases. Among them, Shanghai had 3,200 new local cases, while they earlier claimed there were 1,189 cases on April 12. Officials acknowledged in a press briefing that the outbreak in Shanghai is rapidly increasing, with community transmission not yet effectively contained and spillover to multiple provinces and cities.

Given the regime’s practice of falsifying pandemic figures, there is no way to know the real situation, but it is likely to be more serious.

Shi said that they have to return to some sense of normality.

“It has come to a stage where we have to live with the virus,” Shi said.

“We do not need to spend so much material and financial resources to seal off the city,” she said.

“After we unlock the city, the serious impact of the social problems caused by the current epidemic will be much higher than the epidemic itself.”

Since the end of March, desperate residents have been seeking help online with reports involving starvation, no medical care, suicides, and forced mother-child separation.

A video of a man in a Shanghai community shouting: “We have not eaten for two days, any warm-hearted can help?” was uploaded on Twitter on April 9.

In another video circulating online, Shanghai residents confront security officers, claiming that they have been isolated for nine days and had no food.

Wang said he has also been worried about the lack of food and how it’s affecting his family.

“We bought some rice through e-commerce on April 8,” he said. “It said it was to be delivered April 14, but it then delayed to April 15 when we checked it after two days but it was postponed again to deliver on April 16, at least for now.”

Wang said many people are relying on group purchases for their daily necessities. The seller might not make the delivery if you buy not enough or your address is in a remote location, he said.

“This is the current state of Shanghai … Zero Omicron policy has been a farce so far!” Wang said.