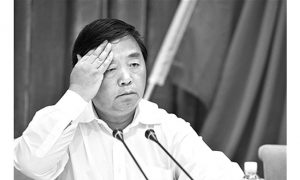 The quiet sacking of a number of key officials in the steel, security, and surveillance industries in Shanghai, long the stronghold of former Party leader Jiang Zemin, indicates that Xi Jinping, the current Communist Party head, is consolidating his control of the city over two years after taking power.

The dismissing of Shanghai security chief Zhu Xiaochao appears to be part of a broader trend—Ma Jian, the vice minister of state security and Zhu’s superior, was investigated for corruption in January, while Zhou Yongkang, the Chinese regime’s former security czar, was pressed with three charges in March.

Zhu, Ma, and Zhou are all linked to Jiang Zemin, who has taken on a godfather role in the Chinese regime since he stepped down as Party boss in 2002. The removal of these security officials suggests that Xi Jinping is taking over the domestic security, prising it out of the hands of officials loyal to Zhou Yongkang and Jiang Zemin, who effectively turned it into their personal kingdom for over a decade.

A study of other recent high-profile corruption investigations of Shanghai officials suggests that Xi is looking at a broad purge of Jiang Zemin’s power base, and not just a simple security reshuffle.

On March 17, Dai Haibo, the ex-deputy chief of Shanghai’s Free Trade Zone, was investigated for “seriously violated party discipline and laws,” a Party term for massive corruption, and was dismissed on April 8. Dai is said to have political and business relations with Jiang’s sons, Jiang Mianheng and Jiang Miankang.

There is also the removal of Ma Xiaodong, the former deputy head of the Party’s science and information technology bureau, in mid-March.

Ma is understood to have played a prominent role in developing the “Golden Shield Project,” a surveillance system that targets dissidents with sophisticated surveillance operations. A California lawsuit, and researchers, indicate that practitioners of Falun Gong, a spiritual meditation group that Jiang ordered an illegal persecution against, were a major target of the project. Chinese activist writer Wang Yuanfei says that Jiang Zemin himself was involved with “Golden Shield,” along with his son Jiang Mianheng, former security chief Luo Gan, public security deputy head Zhu Entao, and others.

At the end of March, Cui Jian, an executive of Shanghai Baosteel Group Corporation, was investigated for “serious disciplinary violations.” Political commentator Xia Xiaoqiang says that the move on Baosteel, a prominent state-owned iron and steel company, represents a significant breakthrough for Xi’s anti-corruption campaign because many state-owned enterprises in Shanghai are controlled by Jiang’s family and their allies.