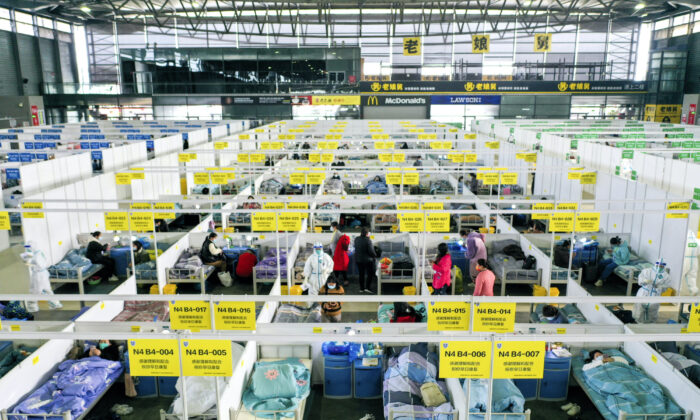 People with mild and symptomatic cases of COVID-19 quarantine at the Shanghai New International Expo Center in China on April 1, 2022. (Ding Ting/Xinhua via AP)
INSIDE CHINA

China’s fear of COVID-19 reached new heights when the city of Shanghai put members of a WeChat group into home quarantine for at least seven days amid a recent COVID-19 outbreak.

The city of 26 million reported 74 locally transmitted COVID-19 cases from July 3 to July 6 that were related to a karaoke bar (karaoke is called KTV in China) in the Putuo District. The disease then spread to seven other KTV venues in five districts, according to the municipal pandemic prevention and control authorities on July 7.

One WeChat (a popular Facebook-like social media platform in China) group is reportedly composed of over 300 KTV goers, but many of them say they didn’t go to the venues where patrons had COVID nor did they have any contact with the positive cases during the relevant times.

However, local district centers for disease control and prevention (CDC) designated the members as secondary contacts, turned their health codes red, and put them in home quarantine for seven days just because they were “in the same WeChat group” as the positive cases, said local officials.

‘Coronavirus can Spread via Internet:’ Resident

One resident under home quarantine was so upset that he wrote an article titled “New findings by the CDC: Coronavirus can spread via Internet,” together with an audio clip, on his Chinese social media account, describing the reason why he was isolated. His post soon went viral in China.

According to the online recording, the netizen called the Qingpu district CDC and asked why his health code turned red and why he was categorized as a “secondary contact” since he had not gone to the karaoke venue in Putuo District.

“We have verified that indeed you didn’t go to that KTV. If you did go, we would have categorized you as a close contact; since you didn’t go, we have treated you as a secondary contact,” the staffer replied in the recording.

According to the city’s isolation rules that were updated on June 13, close contacts of positive COVID-19 cases are under central isolation and home quarantine for seven days, respectively, and they must take PCR tests on a daily basis during the 14 days of isolation. Their health code stays red for the whole period.

Secondary contacts are under home quarantine for seven days, and their health code remains red, after which they are subject to seven days of “self-health management,” and then have limited freedom to move around. They must take PCR tests as required.

In the recording posted online, the netizen asked the staffer of the Qingpu CDC: “How come I am a secondary contact as I have not been there?”

The staffer said: “Because you’re in the same WeChat group [as the positive cases].”

A staffer of the Qingpu CDC confirmed the authenticity of the recording to China Newsweek, a state-run Chinese magazine, in an interview on July 11.

He said that the municipal CDC had “given orders to categorize all the people in the WeChat group as secondary contacts.” The local CDC could “only follow orders,” the staffer told China Newsweek.

The Chinese language edition of The Epoch Times reached out to the Qingpu CDC on July 12 and the staffer answering the call confirmed that all the members of the WeChat group were regarded as secondary contacts.

“This is an order coming from above, not something we say casually,” the staffer told The Epoch Times. “We follow the policies set by the above.”

“The above” refers to higher-level authorities in Chinese.

Liu Ye (pseudonym) is also a member of the quarantined WeChat group. She also lives in Qingpu District.

In an interview with the Chinese language edition of The Epoch Times on July 12, she said that she joined the group many years ago at the invitation of a friend. She hadn’t gone to the KTV for the past six months as it was too far from her home.

Putuo is an urban district of Shanghai, while Qingpu is on the outskirts of the city, and is about 25 miles away from Putuo.

“At about 6 a.m. on July 5, when I was still sleeping at home, the local village committee came and installed a magnetic smart lock on my door, and informed me I had to stay at home for seven days,” she said.

Magnetic smart locks were used as early as 2020 in Shanghai to monitor people isolating at home. They send messages to the control center, including the time the door opens, and the phone number and name of the resident of the household, according to a report dated Feb. 23, 2020, on Yangtse, a Shanghai online news website.

The village committee did not inform her of its intention to install the lock beforehand. After it was installed, they told her that it was a decision by the Shanghai municipal CDC, according to Liu.

She said that her health code was red during the seven days she was made to home quarantine and had turned green yesterday after she took three consecutive PCR tests during the isolation period, all of which were negative.

“It is so absurd that you are categorized as a secondary contact when you contact others who are behind a mobile [phone] screen,” Liu was outraged. She said it was useless for her to lodge a complaint.

China current affairs commentator Tang Jingyuan told The Epoch Times on July 12 that locking up residents just for being in a WeChat group revealed that the actual pandemic situation in Shanghai could be much more serious than what has been disclosed to the public.

“Such draconian measures also reveal how willful and arbitrary the communist regime can be,” said Tang, “it doesn’t care how much people’s lives are affected by these measures.”

Gao Miao and Gu Xiaohua contributed to the article.