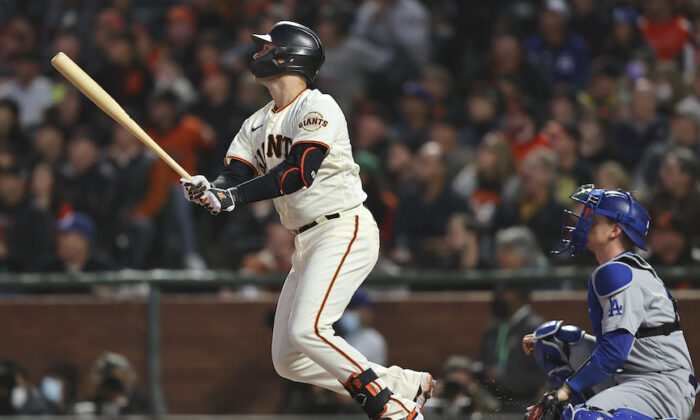 SAN FRANCISCO, Calif.—San Francisco Giants hosted a shut-out of the Los Angeles Dodgers 4–0 on Oct. 8, 2021 in the first game of the National League Division Series.

It was the first meeting between the clubs in the playoffs since they began their rivalry over 130 years ago. The two teams have the best regular-season records in baseball; the Giants edging out the Dodgers by one win with 107. The big story was Giants’ starter Logan Webb who recorded a playoff record-tying 10 strikeouts in 7 2/3 innings. Offensively, the Giants hit 3 home runs; 2 off of Dodgers’ ace Walker Buehler.

Webb said, “There were definitely some nerves that first inning.” But he was able to settle in after the Dodgers’ Mookie Betts hit a single to right field to start the game. Giants’s shortstop, Brandon Crawford, then made a fielders choice error, that allowed Dodgers’ Corey Seager to second. Seager moved to third base following a Trea Turner ground out. Webb was able to avoid a potential Seager run as Justin Turner hit a ground ball up the middle. Webb instinctively blocked the grounder with his foot and was able to get the final out of the first inning.

Dodgers’ catcher, Will Smith, stated of Webb’s performance, “he had command of his slider, command of his changeup and his sinker was pretty good tonight. You know, kept us off-balance, threw a lot of off-speed pitches.”

Webb, who grew up nearby in Rocklin, California, added, “You kind of dream of these moments growing up as a player. Just to be able to be a part of it and do it is something that’s special, for sure.”

Webb’s success is guided by his veteran catcher, Buster Posey. Posey reflected on Webb’s performance, “He’s got three pitches that are elite, and so it’s definitely a luxury on my end, to kind of pick and choose depending on the game, and the lineup that we have, the action that I’m seeing on his pitches to which one we want to lean on more.

“Sometimes it’s going to be more of an even mix and, you know, today we saw the change-up was used more. He’s got the ability to get guys out in a lot of different ways, and it’s a recipe for success, that’s for sure.”

Webb confirmed the support from Posey as he can lean on the veteran for insight “on and off the field.”

Posey also contributed offensively; as he hit a home run off of Buehler in the bottom of the first inning after Tommy La Stella walked to start the inning. Another run was added by a Bryant home run, off Buehler, in the seventh inning. And Crawford finished the scoring in the eighth, hitting a home run off of Dodgers’ reliever Vesia, for a final of 4–0.

Game 2 between these rivals is set for Saturday evening Oct. 9 at 9 p.m. EST.