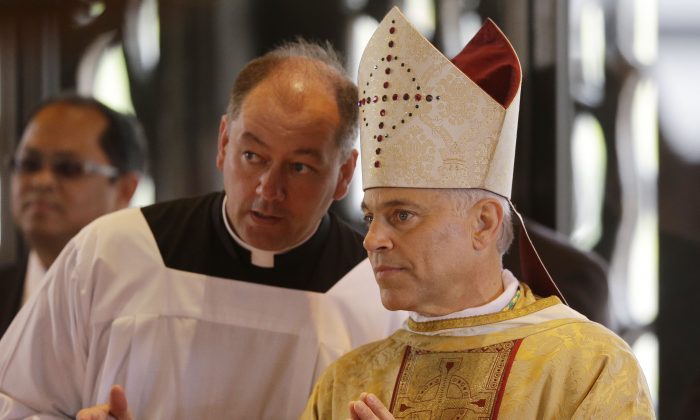 Archbishop of San Francisco, Salvatore Cordileone, at the Cathedral of St. Mary of the Assumption in San Francisco on Oct. 4, 2012. On Monday Cordileone joined a growing number of religious leaders to publicly speak out in favor of Congress passing comprehensive immigration reform. (AP Photo/Marcio Jose Sanchez, Pool)
US

SAN FRANCISCO—Immigration activists in the Bay Area and beyond received a significant morale boost when Archbishop of San Francisco Salvatore Cordileone publicly spoke out in favor of Congress passing comprehensive immigration reform Monday.

“Reform legislation is long overdue, and there can be no better time than now to change our immigration laws,” Cordileone said at a press conference in front of the Mission Dolores Basilica in San Francisco on May 13.

Without presenting specifics, Cordileone laid out some necessary elements a reform should include: a temporary worker program that is safe and fair, a reduction of the application backlog, and a “reasonable and attainable” path to full citizenship, accelerated for those brought here as minors.

Cordileone called on local legislators to pass an ordinance that would restore due-process protections for all immigrants who are now in danger of being arrested, interned, and deported.

Cordileone is part of a growing number of religious leaders and one of the first archbishops in America who have spoken out recently for comprehensive immigration reform, increasing the pressure on Congress to move forward.

Last month a bipartisan group of senators introduced legislation that would provide a path to legal status and possibly citizenship for the estimated 11 million undocumented immigrants. Additionally, the bill would ease access to working visas, strengthen border protection, and increase penalties for employing undocumented workers.

Cordileone has experienced up-close the challenges faced by immigrants when he worked with Hispanic communities as a pastor of a parish near the Mexican border, and later as an auxiliary bishop of San Diego.

At that time, Cordileone held a mass for four people who had died in the desert trying the cross the border, which he called “a powerful symbol of what these families are experiencing.”

Cordileone believes it is possible to reach a just immigration reform that strikes a balance between protecting borders and a “meaningful, easily doable” path to citizenship.

Cordileone said he has not yet made plans to take a national leadership role on this issue. “It’s a team effort. I will play my role,” he said.

The U.S. Conference of Catholic Bishops’ Committee on Migration is a group that is pushing nationally for immigration reform.

“We have a historic opportunity to fix this broken immigration system, and I join the Conference of Catholic Bishops in calling our legislators to act now so that all our families can step out of the shadows and become full citizens of this nation,” Cordileone said.

In early May, Archbishop José H. Gomez of Los Angeles, chairman of the committee, said that in the proposed legislation, the waiting time of 13 years is too long and the application process too expensive for those with low income, according to Catholic New York.