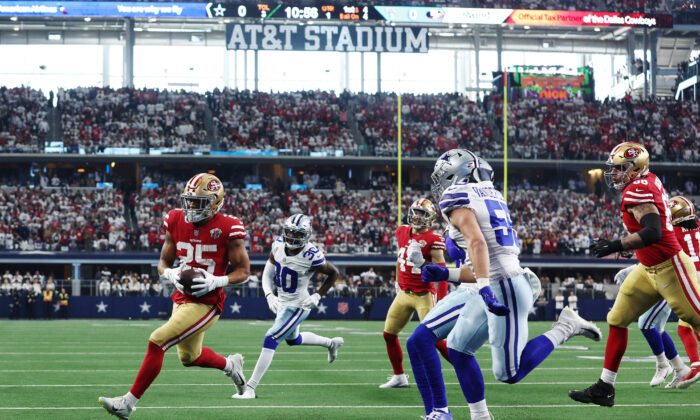 Elijah Mitchell #25 of the San Francisco 49ers rushes for a touchdown against the Dallas Cowboys during the first quarter in the NFC Wild Card Playoff game at AT&T Stadium in Arlington, Texas, on Jan. 16, 2022. (Tom Pennington/Getty Images)
NFL

Dallas currently has the most consecutive playoff attempts—11 from 1996—without reaching the NFC finals. For the recently signed $40 million dollar contract of Dak Prescott, the quarterback has been unsuccessful leading the cowboys to their second first-round playoff loss in three attempts over the past six seasons.

For San Francisco, a balanced attack, along with dominating defensive play, held the Cowboys’ highest scoring offensive unit in check.

Niners Elijah Mitchell ran for 96 yards on 27 carries scoring a touchdown; while receiver Deboo Samuel gained 72 yards rushing on 10 carries for a touchdown, while also catching three passes for 38 yards. The Niners team total in rushing was 169 yards, alongside 172 yards through the air.

Quarterback Jimmy Garoppolo completed 16 of 25 passes for 172 yards and one interception. Garoppolo led the offense on a 14-play 75-yard opening drive that was capped off by Mitchell’s four yard touchdown run.

“Guys just stepping up big in big key situations, that’s really what it was all day,” said Garoppolo. “Early on, we got it rolling with the offense and the defense just throughout the entire day. We got some dogs on our defense, man. It’s fun.”

The 49ers’ defense held the Cowboys’ top offense in the NFL to 307 yards, and sacked Prescott five times for 40 yards. They stopped Dallas on their first two drives, while persevering through a concussion injury to star end Nick Bosa, who collided with teammate D.J. Jones just before halftime.

The Niners scored field goals on their remaining first-half drives for a lead of 16–7. Dallas eventually scored following a 67-yard drive on nine plays, culminating with Prescott completing a perfectly placed pass of 20 yards into the corner of the end zone to Amari Cooper with 5:19 remaining in the half.

Prescott completed 23 of 43 attempts for 254 yards, one touchdown, and one interception. The Cowboys could only rush for 77 yards total, with Ezekiel Elliott leading with 12 carries for 31 yards. Their receiving core kept them in the game with 270 yards from nine different receivers, led by tight end Dalton Schultz with seven receptions for 89 yards.

On their second drive of the third quarter, Prescott was intercepted by K’Waun Williams, which would lead to a one-play touchdown from Samuel’s 26-yard run off the right side to increase the lead, 23–7, with 5:50 left in the third quarter.

Greg Zuerlein’s 51-yard field goal and Prescott’s 5-yard touchdown run got the Cowboys within six points with 8:02 remaining in the game.

After failing on downs, Dallas had one last drive with the ball on their 20 yard line with 39 seconds remaining. They were able to move the ball 56 yards on five plays, but ended after Prescott ran 17 yards up the middle to the 24-yard line, and was unable spike the ball to stop the clock before time expired. Prescott could have made the decision to end the play sooner, with a play-ending slide, to allow more time for one last attempt to score.

Their was much controversy on the final play. “The communication that I was given on the sideline was they were reviewing it,” said Cowboys coach Mike McCarthy. “They were going to put time back on the clock. And the next thing I know, they’re running off the field.”

“It was like [that] the whole day, it really was,” said Garoppolo of the final drive. “It was a dogfight, hell of an atmosphere out here. I mean, the fans were nuts. It was everything we thought it was going to be. It was fun.”

“I think this is a time that you get this combination of players together, you need to have success,” said Dallas owner Jerry Jones. “The team shouldn’t have been in a position for that last play to be something controversial, so I’m not going to make it bigger than it is.”

“I’m still trying to figure out where I’m at,” added Niners coach Kyle Shanahan. “It’s pretty emotional out there. Lots of opportunities to win the game. Those guys (Cowboys) just kept fighting. We made a couple mistakes there at the end. We shouldn’t have let it get there.”

Dallas, the NFL’s most-penalized team, put themselves at a disadvantage with 14 infractions, losing 89 yards; four of the penalties gave the Niners first downs.

San Francisco will travel to top-seeded Green Bay next weekend for the NFC semifinals; they have had recent play-off success against the Packers.