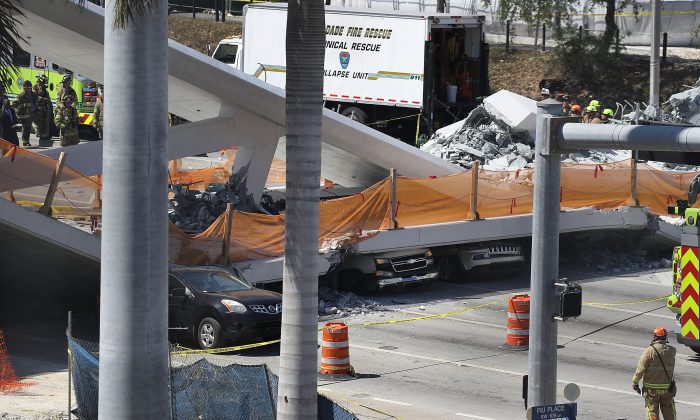 Vehicles are seen trapped under the collapsed pedestrian bridge in Miami, Fla., on March 15, 2018. (Joe Raedle/Getty Images)
Crime and Incidents

“Several people were killed. I just don’t know how many,” Alejandro Camacho, a spokesman for the Florida Highway Patrol said in a telephone interview.

Eight vehicles were crushed underneath the pedestrian crosswalk and eight victims were transported to hospitals, said Paul Estopinan, operations battalion chief at Miami-Dade Fire Rescue Department, during a press conference.

The department received a call about the collapse around 1:30 p.m, Estopinan said.

Munilla Construction Management, which installed the bridge, in a statement on Twitter, said the bridge suffered a “catastrophic collapse causing injuries and loss of life.”

The bridge connects the university with the city of Sweetwater and was installed on Saturday in six hours over the eight-lane highway, according to a story that was posted on the university’s website. It was 174 feet (53 m) long and weighed 950 tons.

The bridge was intended to provide a walkway over southwest Eighth Street, one of the busiest roads in South Florida. An 18-year-old female FIU student from San Diego was killed while trying to cross the street near FIU last August, according to local media reports.

Television footage showed firefighters were walking across the flattened wreckage and medics treating injured people. Emergency personnel appeared to be trying to work their way through a hole in the top of the bridge.

“Our brave first responders are working feverishly to save lives,” she said at a news briefing.

Florida Governor Rick Scott will head to the scene later in the day, his office said.

The National Transportation Safety Board said on Twitter that it was sending a team to investigate the bridge collapse.

Munilla Construction Management was founded in 1983 and owned by five brothers, according to its website. In addition to its Florida operations, the company also has divisions in Texas and Panama and employs 500 people.