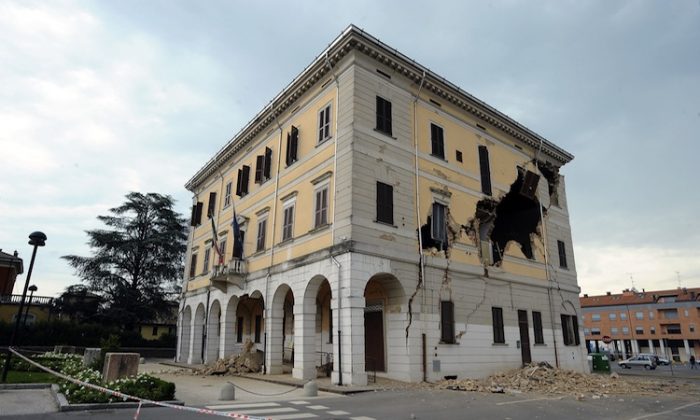 The Town Hall of Sant'Agostino is damaged following an earthquake on May 20, in Ferrara, Italy.(Roberto Serra/Iguana Press/Getty Images)
Europe

A magnitude-6.0 earthquake rocked northern Italy on Sunday, killing at least seven people, it was reported. About 50 more were injured.

Italian Prime Minister Mario Monti, who is in Chicago for the NATO summit, pledged quick action to relieve the situation. “All that is necessary will be done as soon as possible,” he was quoted by CNN as saying. He left Chicago early to return home to deal with the tragedy.

Lina Gardenghi, an 83-year-old resident of Bondeno said, “I have never felt anything like this,” Reuters reported.

Several historic buildings were damaged, including a medieval castle.

“We have practically lost all our artistic patrimony,” Alberto Silvestri, the mayor of San Felice Sul Panaro, told Reuters. “Churches and towers collapsed. The theater is still standing but has cracks.”

The quake struck at around 4 a.m. local and its epicenter was 22 miles north of Bologna, with a depth of only 3.2 miles, the U.S. Geological Survey reported.