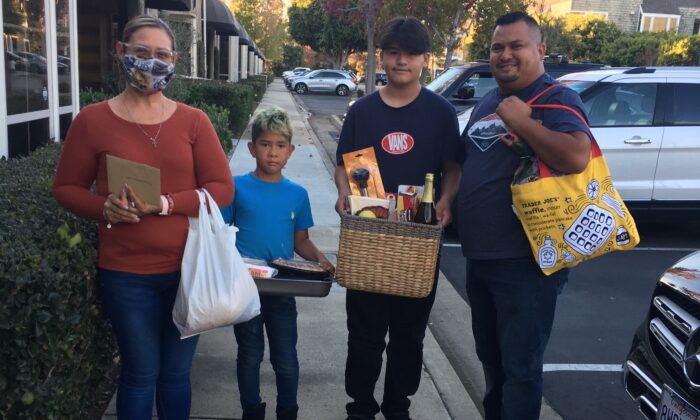 At any given time, low- to extremely low-income families in Orange County, California, face the threat of becoming homeless or unable to put food on the table due to an unexpected misfortune, a severe health issue, marital split, or job loss.

For many of these families, finding their way back to normalcy has been made possible by the work of Serving People in Need (SPIN), a Costa Mesa, California-based nonprofit dedicated to helping local residents with children get back on their feet.

SPIN Executive Director Stephanie Smolkin says there was a dramatic increase in Orange County residents who were furloughed or lost their jobs, either temporarily or permanently, resulting in a devastating, unanticipated impact on their ability to provide for their families.

“We saw a 180 percent increase in calls in the first year of COVID,” Smolkin told The Epoch Times.

Smolkin said that prior to the distribution of funds from the $2.2 trillion Coronavirus Aid, Relief, and Economic Security Act, signed into law by President Donald Trump in March 2020, families were becoming desperate to find help with monthly expenses. Many who asked for aid told Smolkin they never thought they would find themselves in a situation so out of their control.

“With all of the COVID-19-related business closures and layoffs, our families were really struggling just to pay their rent,” said Smolkin.

The organization assists families including those who are homeless, those who are living in emergency shelters, those who have received an eviction notice, and those who have a place to live but seek financial help for rent. They must have at least one minor child living with them and provide a form of income verification.

“We have very low recidivism rates,” Smolkin said. “Our recidivism is 6 percent, which equates to roughly two families of the 145 families that we’ve housed over the last two-year period.”

Since its inception in 1987, SPIN has served more than 74,000 families and individuals in Orange County.

SPIN case managers work with each family for a minimum of one year, helping them to remain housed and eventually to become completely self-sufficient.

“The worst thing that can happen to our families that receive assistance to get into housing is if they lose that housing. It’s very difficult to get it back,” Smolkin said.

Smolkin told The Epoch Times that SPIN has been successful largely due to maintaining a small staff and keeping overhead low. Generous donations and the efforts by more than 1,800 volunteers help SPIN accomplish a significant amount of work throughout the year.

“When somebody donates to SPIN, they can know that their monies are going to who they really want it to, which is the people we help,” Smolkin said. “We don’t have a marketing department, we don’t have a big operations department, we all kind of do double duty to make it work, but we’re very efficient in what we do.”

SPIN supporter and volunteer Jim Buchanan told The Epoch Times that he got involved with the organization for a variety of reasons, but that he and his wife, Lorie mostly felt their philosophy that charity begins at home was in sync with SPIN’s mission.

“Lorie and I were introduced to SPIN at one of their Orange County fundraisers many years ago,” Buchanan said. “We were impressed with their community-based, hand-up approach, low overhead, caring volunteers, and amazing success rate. We’ve supported SPIN ever since. Caring and giving starts at home, and Orange County is ours.”

When current SPIN Board Chairman and President Charlie Granville was asked by a friend more than 12 years ago to consider volunteering with the nonprofit, he didn’t think it was for him.

“I had a lot of mixed feelings about it. Most of what I knew about homelessness was from the media. They portrayed it in a way that made me think maybe it wasn’t a helpable problem,” Granville told The Epoch Times.

He decided to give it a try anyway, mainly because SPIN’s focus is helping families with dependent children. He soon realized that his impression of who the people SPIN was helping was a misnomer.

“We kind of live in a bubble here in Orange County, which is mostly affluent and historically has had fewer homelessness issues compared to a city, let’s say like Los Angeles. I had all kinds of visions of who the homeless were,” Granville said. “All of them are wrong.”

“Once I got involved with SPIN, I realized that these are people that are just down on their luck—they lost a job, or they got divorced, or they had some unexpected medical issues,” Granville said.

“Sometimes all it takes is just a little help, a little bit of a bridge to help a family get over the hump and back on their feet, or an individual to get back on the right path.”

Granville has seen many successes over his years of involvement with SPIN, and he likes to share one story especially about a local family that had come upon hard times. At one point, they were living out of their car; the father had lost his job and the mother had cancer.

Thanks to the hand up they received from SPIN, in a few years, life got back on track and the daughter went on to graduate from an Ivy League university and land her dream job with Apple.

“At the end of the day,” Granville said, “the people SPIN helps are basically like you and me, just with some bad luck.”