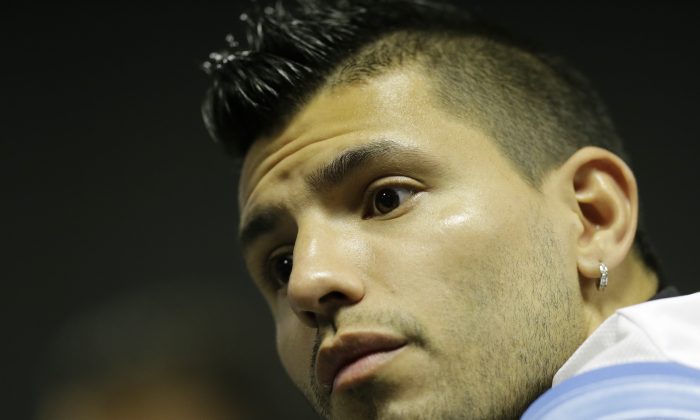 Will Sergio Aguero feature for Argentina in the World Cup final?

The Manchester City forward had an injury-plagued season, and unfortunately injured his thigh in Argentina’s World Cup group stage match against Nigeria.

After seating out for the next three games, Aguero returned as a  substitute in the semi final game against Netherlands, and managed to score Argentina’s third penalty in the shootout.

Aguero did not look like he was back to full strength or fitness in that match, and hardly had any impact on proceedings.

The mercurial forward said that he “will try to find the energy from wherever to do it as well as possible” if he plays, but given his performance in the semi final, it is highly unlikely that coach Alejandro Sabella will start him.

Expect Aguero to make a cameo appearance from the bench if things are going Argentina’s way.

Aguero: Brazil Collapse Can Happen to Anyone

BELO HORIZONTE, Brazil (AP) — Germany’s 7-1 thrashing of five-time champion Brazil has left no doubt among Argentina’s players about the challenge they face in the World Cup final on Sunday.

Striker Sergio Aguero says he and his Argentine teammates obviously took notice of the rout.

“Germany is a great team. What happened to Brazil could happen to any team,” he said.

But, Aguero added, the Germans also have reason to be concerned, “knowing that we have players who can create danger up front — We’re in the final for a reason.”

After injuring his left thigh in Argentina’s last group-stage match against Nigeria, the Manchester City striker was sidelined for two knockout games before going on as a substitute in the semifinal Wednesday against the Netherlands. He failed to have an impact in the attack but scored the third penalty in Argentina’s 4-2 shootout win.

“When you come back from injury, in the back of your mind you are worried about it happening again,” Aguero said. “When you miss three matches in a World Cup with the rhythm the guys have you realize you are lacking something.

“But if I get called up to play in the final I will try to find the energy from wherever to do it as well as possible.”

Argentina hadn’t advanced beyond the quarterfinals since the 1990 World Cup, so the country is euphoric about the team’s success in Brazil.

Unlike Germany, Argentina has advanced with single-goal margins against its opponents and couldn’t score before the shootout against the Netherlands. Four years ago in South Africa, Argentina lost 4-0 to Germany in the quarterfinals.

“At this point who is favorite, who is not, it doesn’t make a difference,” midfielder Maxi Rodriguez said. “Both teams feel a responsibility to go all the way. We’re going to do our part to make it.”