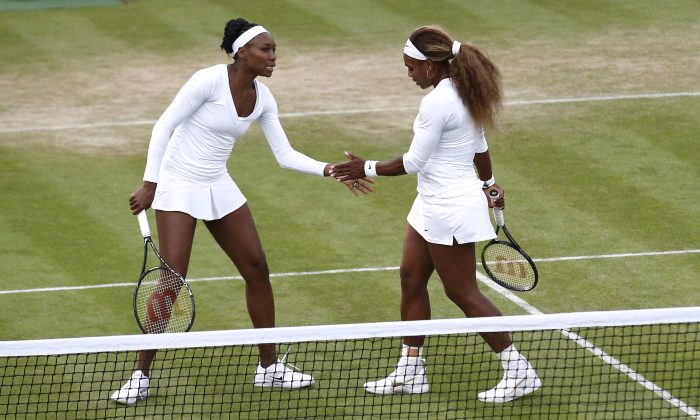 US players Venus Williams (L) and Serena Williams play their women's doubles first round match against Georgia's Oksana Kalashnikova and Ukraine's Olga Savchuk on day three of the 2014 Wimbledon Championships at The All England Tennis Club in Wimbledon, southwest London, on June 25, 2014. (ANDREW COWIE/AFP/Getty Images)
Sports

The Williams sisters have made the second round of Wimbledon 2014 Women’s Doubles.

Live stream is available through BBC iPlayer and Watch ESPN, as well as the WTA and Tennis TV.

Serena and Venus Williams are taking on Kristina Barrois from Germany and Stefanie Voegele from Switzerland.

In the first round match, the Williams siblings came back to beat Oksana Kalashnikova and Olga Savchuk 5-7, 6-1, 6-4 in a game that lasted nearly two hours.

The sisters are currently ranked No. 88 in the doubles ranking.

Check out some of their highlights, and an AP article below.

LONDON (AP) — Roger Federer and Stan Wawrinka form a 1-2 Swiss punch on the two featured courts at Wimbledon on Saturday.

While Federer may have the most Grand Slam titles, a record 17, Wawrinka has bragging rights as the most recent major champion, winner of this year’s Australian Open in January.

Federer is scheduled to play Saturday’s final match on Centre Court, taking on Santiago Giraldo of Colombian in a third-round match. Wawrinka is to play the final match on Court 1, facing Denis Istomin of Uzbekistan.

Wawrinka improved to a career-best No. 3 ranking after he beat Novak Djokovic in Melbourne, and found himself in the unusual position of being the highest-ranked Swiss player. He’s still ranked No. 3, one spot ahead of Federer. But Federer is seeded No. 4 here and Wawrinka No. 5 because of Federer’s superior record on grass, including seven Wimbledon titles.

Here are five other things to look for at Wimbledon on Saturday:

DUBAI DEFEAT: Serena Williams opens play on Court 1 against Frenchwoman Alize Cornet, who beat the American in straight sets the last time the pair met in February in Dubai. Overall, Williams leads 3-1 in career matches, including in three sets at the Beijing Olympics in 2008. No. 1 Serena will be attempting to avoid having the Williams family lose in singles two days in a row; sister Venus was beaten in three sets by 2011 Petra Kvitova on Friday. Serena and Venus are scheduled to play a doubles match later Saturday against Kristina Barrois of Germany and Stefanie Voegele of Switzerland.

A NADAL DECADE: Rafael Nadal, who takes on Mikhail Kukushkin of Kazakhstan to open Centre Court play, is playing Wimbledon for the 10th time. The two-time champion reached the third round for the first time since 2011 and lost in the first round last year to Steve Darcis, the first time he’s lost in the first round at a Grand Slam. He’s also looking to become the second man in the Open era to win the French Open and Wimbledon back-to back three times. Bjorn Borg completed the double from 1978-80, while Nadal won both tournaments in 2008 and 2010.

CONSISTENT KEYS: Madison Keys, the third-ranked American behind Serena Williams and Sloane Stephens, goes into her match against Yaroslava Shvedova of Kazakhstan as one of the most improved players in the last year. The 19-year-old Keys — the youngest player in the top 50 — won her first WTA title two weeks ago at Eastbourne. The win moved her to a career-high No. 30.

ISNER IN FORM: Ninth-seeded John Isner had never advanced past the second round at Wimbledon, and will be looking to get to the fourth when he plays Feliciano Lopez of Spain. Isner beat Jarkko Nieminen of Finland 7-6 (17), 7-6 (3), 7-5 with the help of 32 aces in the second round. “I’m no stranger to matches like this,” Isner said. He won the longest tennis match in history when he beat Nicolas Mahut 70-68 in the fifth set of an 11-hour, 5-minute match spread over three days at Wimbledon in 2010.

SEMIFINAL SUCCESS: Eugenie Bouchard’s achievement as the only woman to reach the semifinals at both Grand Slam tournaments this year will be tested when she plays Andrea Petkovic of Germany to open play on Court 3. The 20-year-old Canadian has not beaten Petkovic in three matches.