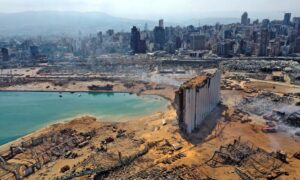 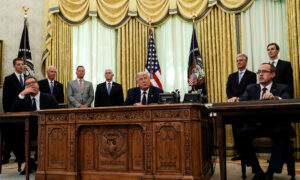 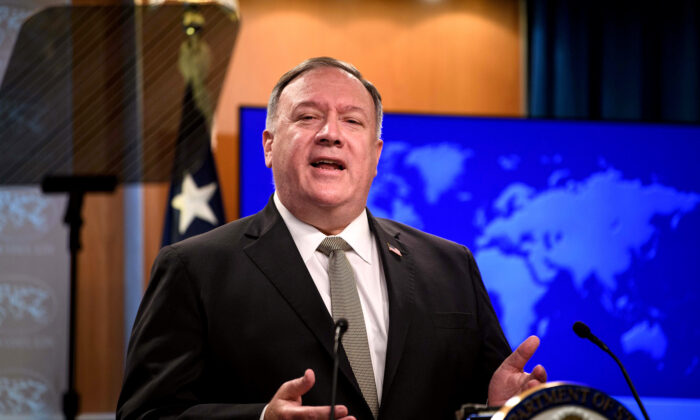 Secretary of State Mike Pompeo speaks during a news conference at the State Department in Washington, on Sept. 2, 2020. (Nicholas Kamm/Pool via Reuters)
World

Serbia’s announcement to designate Hezbollah as a terrorist organization will limit the ability of the Lebanese Shia militia group supported by Iran to operate in Europe, said U.S. Secretary of State Mike Pompeo in a statement on Sunday.

Serbia’s intention was announced as a part of the economic normalization deal between Serbia and Kosovo brokered by President Donald Trump and signed earlier in September, according to the statement.

In 2019, Hezbollah was banned by the United Kingdom and designated as a terrorist organization by Kosovo.

“The dominoes are falling on Hezbollah’s European operations, where it has continued to plot terrorist attacks, procure military technology, and raise much needed funding,” Pompeo said in the statement.

The United States, which first designated Hezbollah as a foreign terrorist organization in 1997, continues to call on European countries and the European Union to designate or ban it “in its entirety … with no distinction between its so-called ‘military’ and ‘political’ wings,” Pompeo said.

“We urge all countries in Europe and elsewhere to take whatever action they can to prevent Hezbollah operatives, recruiters, and financiers from operating on their territories,” Pompeo said.

Hezbollah is a terrorist organization that “is responsible for multiple large-scale terrorist attacks, including the 1983 suicide truck bombings of U.S. Embassy Beirut and the U.S. Marine barracks; the 1984 attack on the U.S. Embassy Beirut annex; and the 1985 hijacking of TWA flight 847, during which U.S. Navy diver Robert Stethem was murdered,” according to State Department’s 2019 report on terrorism.

Last week, Pompeo announced the designation of two former Lebanese ministers for political and economic favors to Hezbollah, including awarding government contracts worth millions of dollars to Hezbollah-owned companies and moving government money to Hezbollah-associated institutions, according to a statement.

Hezbollah draws “its ideological inspiration from the Iranian revolution and the teachings of the late Ayatollah Khomeini.” Most of its funding, estimated at $700 million annually in recent years, is provided by Iran, the report said.

Hezbollah was the only militia group that was allowed to keep its arms after the end of the Lebanese civil war in 1990 under the pretext of protecting Lebanon “from [the] Israeli enemy,” Edy Cohen, an expert on the Middle East at the Begin-Sadat Center for Strategic Studies, told The Epoch Times in an interview in August.

In the last Lebanese general election in 2018, Hezbollah won only 12 seats in the 128-member unicameral Lebanese parliament. However, it holds 70 seats together with groups and individuals that are politically aligned with it.

As a result, Hezbollah has veto power over decisions unfavorable to it, Cohen said.

Hezbollah has been heavily involved in the ongoing conflict in Syria, fighting on the side of Bashar al-Assad’s regime where it has committed numerous war crimes and human rights violations.

Hezbollah has placed about 150,000 rockets at its southern border aimed at Israel, according to the U.S. State Department report (pdf). “Missile systems, precision-guided missiles that Hezbollah holds in the south,” they all pose a risk to the security of the region, Pompeo said at a press conference earlier this month. “Everybody disarms but Hezbollah,” he added.

Hezbollah has to give up its weapons and its members should live normal lives like other Lebanese, Cohen said, adding it will not surrender its arms unless it is forced to.