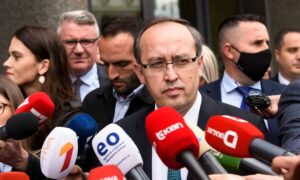 Kosovo PM Cancels Trip to US for Talks With Serbia
0 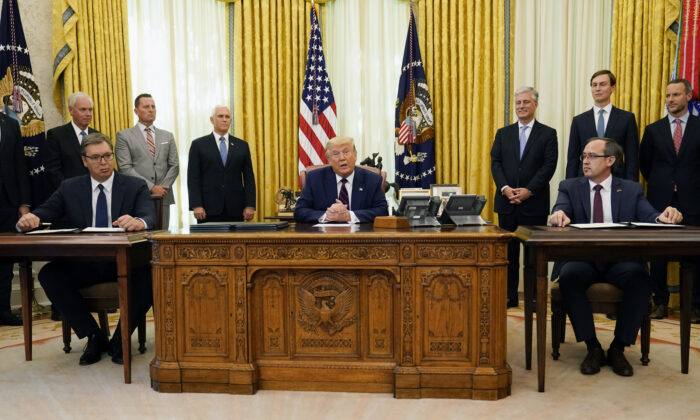 Serbia and Kosovo have agreed to normalize economic ties, U.S. President Donald Trump said on Friday, calling the agreement a “real breakthrough” that would help the two Balkan countries prosper after decades of war and failed negotiations.

Both countries—parts of the former Yugoslavia—agreed to freeze talks about normalizing political ties for a year to allow the economic agreement to take root, U.S. officials said, according to Reuters.

“These were difficult talks for us, but I’m truly satisfied,” Serbia’s President Aleksandar Vučić told Serbian reporters in Washington.

He stressed that the economic agreement does not include “mutual recognition” between Serbia and Kosovo. But he hailed the talks as a big victory for Serbia and a step toward closer ties with the U.S. Despite officially seeking membership in the European Union, Serbia has been forging close political, economic, and military ties with Russia and China.

Kosovo’s Parliament declared independence from Serbia in 2008, nine years after NATO conducted a 78-day airstrike campaign against Serbia to stop a bloody crackdown against ethnic Albanians in Kosovo.

Most Western nations have recognized Kosovo’s independence, but Serbia and its allies Russia and China have not. The ongoing deadlock and Serbia’s unwillingness to recognize Kosovo have kept tensions simmering and prevented the full stabilization of the Balkan region after the bloody wars in the 1990s.

In addition, Kosovo and Israel have agreed to establish diplomatic relations. Serbia has committed to move its embassy to Jerusalem by July and open a commercial office in Jerusalem this month, Trump said. The move will make Serbia the first European country opening an embassy in Jerusalem.

Israeli Prime Minister Benjamin Netanyahu hailed the moves and said Israel would establish diplomatic relations with Kosovo, according to the Times of Israel.

“Kosovo will be the first country with a Muslim majority to open an embassy in Jerusalem,” Netanyahu said

Both Serbia and Kosovo also agreed to designate Hezbollah­—a Lebanese Shia militia—as a terrorist organization and keep their 5G communication networks clean by excluding equipment from untrusted vendors from them, reported Balkan Insight.

Trump also praised Vučić and Kosovo Prime Minister Avdullah Hoti for “tremendous bravery” to “embark on these talks and to come to Washington to finalize these commitments.”

Trump said that have made safer not only their countries but also the Balkans, and the world.

Vučić said that having “a unified economic zone, an entire Western Balkans,” will bring Serbia to the real economic results.

Hoti said that in his opinion the agreement is a “huge step forward” that “should lead eventually to mutual recognition between the two countries.”

“We share the same values of freedom, democracy, an open-market economy,” Hoti added.

National Security Adviser Robert O’Brien said that in his opinion the economic agreement is “a first step” toward achieving political solutions.

U.S. Secretary of State Mike Pompeo issued a statement supporting this economic normalization agreement and confirming U.S. support “for the ongoing negotiations between Kosovo and Serbia toward comprehensive normalization of relations.”

Pompeo called the normalization of ties and mutual recognition between Kosovo and Israel “the monumental achievement” and said that together with Serbia’s commitment to open a commercial office and move its embassy to Jerusalem it will contribute to peace “between our partners in Europe and the Middle East.”