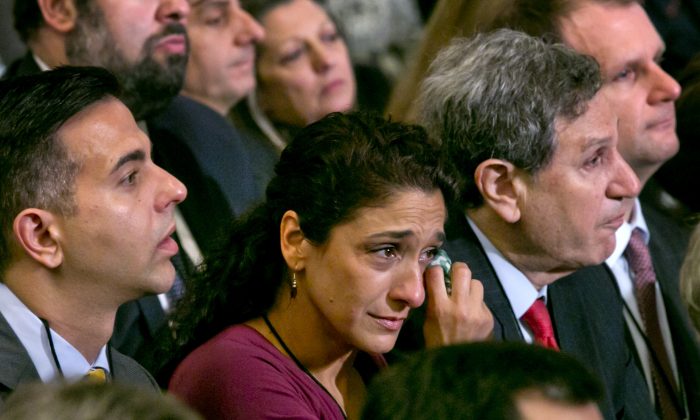 A woman in the audience dries a tear during the dedication ceremony in Foundation Hall of the National September 11 Memorial Museum in Lower Manhattan. (Richard Drew/AP)
New York

NEW YORK—After a jetliner struck the south World Trade Center tower on Sept. 11, 2001, survivors, some injured, were stuck in the wreckage on the 78th floor. A man’s voice, clear and calm, called out that he had found a staircase.

Wearing a red bandana over his mouth and nose he guided survivors to safety, including carrying an injured woman over his shoulder down 17 flights of stairs. Then he went back up to help others, over and over, until the towers collapsed.

The people he saved didn’t know what his name was. All they remembered was the red bandana.

Months laters, Alison Crowther, who had lost her son in the terrorist attacks, read a newspaper article with stories from survivors who remembered the man in the red bandana. She knew right away that the man was her son, Welles Crowther, who was 24 when he died.

A red bandana, just like the one Welles Crowther wore, is now displayed at the National September 11 Memorial & Museum at ground zero. It is one of the thousands of mementos that have already led visitors to call it an emotional experience and a monument to loss and survival.

President Barack Obama told Welles Crowther’s story at the museum Thursday morning in a moving dedication ceremony. Crowther’s mother then came on stage alongside Ling Young, a woman he saved.

The red bandana, like so many other objects in the museum, elevates the museum beyond a place for grief and painful memories, by linking the lives of those lost with the hope and inspiration of those who live on to remember them.

“For us he lives on the people he helped and in the memory of what he chose to do that Tuesday in September,” Alison Crowther said. “Welles believed that we are all connected as one human family, that we are here to look out for and to care for one another.”

Former firefighter Mickey Kross was trapped beneath the smoldering rubble with 13 others. Above them rescue workers didn’t know where to start. But they kept “digging, digging, and digging,” Rudy Giuliani, a former New York City mayor, said.

Down beneath, after hours of being trapped, Kross and the others saw a ray of sunshine. Him and the 13 others were eventually rescued.

“After our rescue many of us joined the rescue and recovery teams at Ground Zero to do for others what had been done for us. We had to,” Kross said.

The museum opens on May 21, but opening day tickets have already been sold out. Admission to the museum is free on Tuesdays from 5 p.m. to 8 p.m. Admission is also free for victims’ family members and rescue and recovery workers.