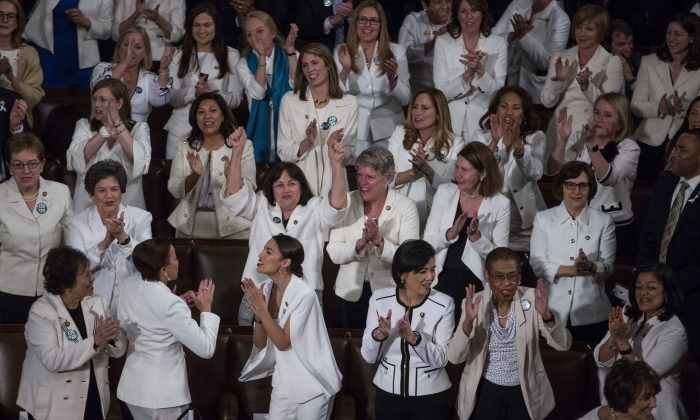 It was a striking sight. There, in Congress, as President Donald Trump delivered the 2019 State of the Union address, a section of white lay amid the black and blue crowd, a glorious show of female solidarity.

The message was all positive: “To honor the legacy of women’s suffrage in the United States” and to mark “the historic number of women” now in the legislative branch. The house cheered, Republicans and Democrats both, when the president saluted them, and the women in white rose to hug and high-five one another.

Or, you could view the scene in a whole different way. The politics of the white-dress gesture had a lot more partisanship than a pure celebration of female advancement would suggest. They despise Trump, to be sure, not to mention the new Supreme Court justice sitting nearby, who threatens one of the cornerstones of feminism, Roe v. Wade. It had been leaked that the president would say something about abortion, too, which energized the members to come forth as defenders of their sex against conservative politics.

But there was something more antagonistic about this sea of white than today’s controversies. It was, instead, the defiant, in-your-face, hard-nosed expression of identity politics.

Elected officials sent to Washington to represent their constituents—all of them, not just one identity—proclaimed to the country their full identification with, precisely, just one identity. Beneath the joy was a denial: We’re not like the others in this room.

The surface was wholly contemporary—women in the halls of power, moving forward after a long history of suppression, jubilant and ready to act. But the effect was an old story of factionalism. Even if you comply with our politics, they implied, you won’t have our full acceptance. Those white outfits were an avowal of separatism that, we may be sure, every wearer will retain in her work in the coming months.

It’s going to be hard for the men in the Democratic Party. Conservative men already feel a political separation from liberal women in the House and Senate, so the sex gap doesn’t hit them so hard. Trump, in fact, appeared entirely relaxed when he praised the rise of women in Congress and called for a cheer, sure of exactly where he stands in their hearts. They are adversaries to him; their sex makes no difference.

But liberal men aren’t so sure. They want to show solidarity with women at all times. One male member, Rep. Dean Phillips of Minnesota, actually donned white himself and sat with the ladies. But inevitably, conflicts will arise among Democrats in the ordinary course of legislation and budgeting. In that case, with the white suits declaring their difference even from the men in their own party, what would otherwise be a difference over interests and policies might appear a sex/gender difference.

For instance, if a male Democrat disfavors elements of New York Rep. Alexandria Ocasio-Cortez’s Green New Deal because he represents a heavy-industry district, that may not be the whole story. Does the congressman have a problem with women in charge?

Anyone who doubts the possibility of that turn hasn’t read the tweets that Ocasio-Cortez has sent out in response to any and all criticisms. The white-suiters have inserted a separatism into Congress that won’t go away anytime soon.

And if the male members think it means a happy new diversity in the ranks, and that they will draw collegial feelings from the white-suiters if they applaud their presence, they will find themselves outflanked and beaten down in every political skirmish.