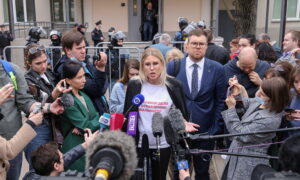 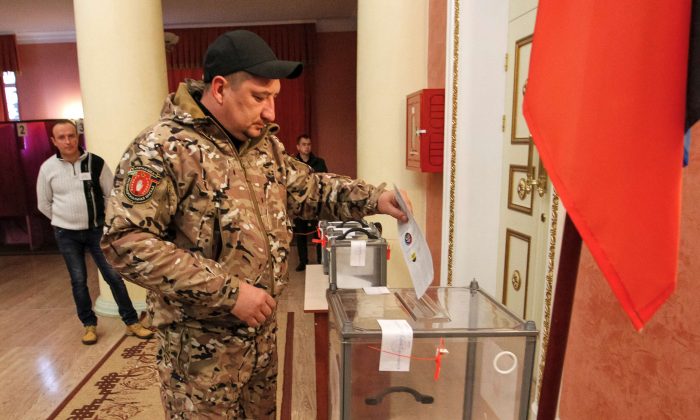 DONETSK, Ukraine—Two separatist-controlled regions of eastern Ukraine announced the winners of leadership elections on Nov. 12 that were dismissed by Kiev and its international allies as a sham exercise engineered by Russia to install puppet regimes.

The polls took place on Nov. 11 in the shadow of a conflict between Ukraine and Russian-backed rebels that has killed more than 10,000 people since 2014 and poisoned relations between the two neighbors.

The Donetsk region’s acting head, Denis Pushilin, whose predecessor was killed in an explosion in August, was confirmed as leader with 61 percent of the vote, while the acting chief of Luhansk region, Leonid Pasechnik, won with 68 percent support.

Kremlin aide Vladislav Surkov congratulated the winners, according to the separatist press service DAN, although a Kremlin spokesman later said he wasn’t aware any congratulations had been extended.

The United States, European Union member states, and Canada condemned the vote as illegal and in violation of a ceasefire agreed in Minsk, the capital of Belarus, in 2015.

“This reaction clearly states that, on the one hand, these elections will not be recognized by anyone. This is a brutal violation of the Minsk agreements,” Ukrainian President Petro Poroshenko said. “On the other hand, there is a call for the responsibility of the Russian Federation as the organizer of these elections.”

Poroshenko called the elections “illegal, and represent yet another example of Russian subversive activity.”

‘Under Conditions of Occupation’

“These particular elections are a mockery, really, of the idea of genuine elections that need to be held,” Kurt Volker, Washington’s envoy to the Ukraine conflict, told reporters on a Nov. 8 conference call.

Russia disputed that the elections violated the Minsk accord and instead blamed authorities in Kiev for failing to honor its commitments in the peace process.

Kremlin spokesman Dmitry Peskov said he wasn’t aware of any congratulations to the vote-winners, but added that it was understandable the separatists wanted to hold elections.

“We are talking about two regions that are completely rejected by the rest of the country and are under an absolute embargo. The Minsk accords are not being implemented by Kiev,” Peskov told reporters on a conference call in Moscow.

Pushilin said it was a turning point in the region’s history. “We have proved to the whole world that we can not only fight, not only win on the battlefield, but also build a state based on real democratic principles,” he said Nov. 11.

“Pushilin is a soap bubble, there are completely different people behind him, this is Moscow,” a former separatist leader, Alexei Alexandrov, told Reuters.

Ukraine-based analyst Volodymyr Fesenko said Russia was using the elections to give legitimacy to the region’s leaders and may try to turn the fighting into a frozen conflict, with the two breakaway regions as protectorates.

Peskov acknowledged Russia had influence on the region’s leaders, but said, “it is not unlimited.”

Ukraine and the West say Russia de facto controls the eastern Donbass region by propping up puppet leaders with troops and heavy weaponry, which Moscow denies.

Several former separatist leaders have fled the Donbass area, saying they feared for their lives after their comrades turned on them. Other leading separatist commanders have been killed in unexplained circumstances.