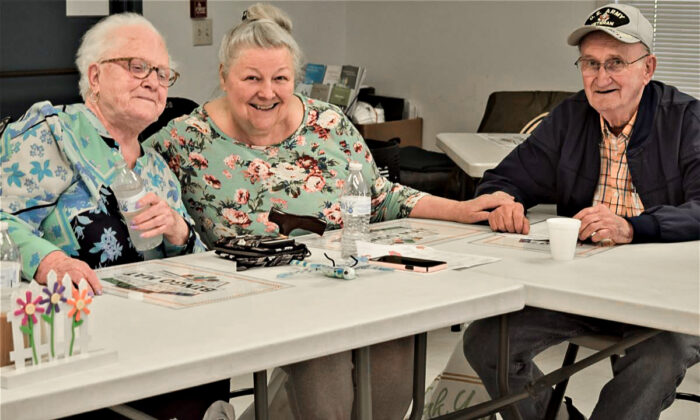 Ria Foltz, 86; Christine Kuss, 71; and Tom Schultz, 85, get ready to play Bingo at the Millersville Senior Center in Millersville, Penn., on May 9, 2022. (Beth Brelje/ The Epoch Times)
Economy

In response to inflation, the prizes at bingo have changed in recent weeks at the Millersville Senior Center in Millersville, Pennsylvania.

Instead of fun little trinkets, winning bingo players now choose between cleaning supplies, laundry items, and snacks, depending on the theme of the week, Senior Center Director Starr Brubaker told The Epoch Times.

Dryer sheets and bottles of detergent are practical items that help defray the growing cost of living. Seniors there say they’re happy to win such prizes because they’re feeling inflation in all areas of their lives, and they’re worried they won’t have enough money to get by in the future.

One senior at the center said her husband is at retirement age, but he’s not retiring yet because they fear it will be difficult to keep up with inflation.

Seniors gather at the Millersville Senior Center in Lancaster County on Mondays, Tuesdays, and Wednesdays for fellowship, exercise, and recreation, such as crafting and friendly games of pinochle. They also share provided meals administered by the county. There are similar programs across the nation.

Some who qualify get additional food to take home. After a game of Bingo on Monday, some received a monthly fresh food supplement: a bag with baby carrots, a green pepper, an orange, two apples, bananas, and two potatoes. The food helps their monthly income last longer.

Some are making tough decisions about what they can and can’t afford, including food choices and medicines.

“It would be harder for some of us, if not for the senior center,” Christine Kuss, 71, told The Epoch Times, indicating that some wouldn’t have enough to eat. “Rent is getting higher. I gave up on my $ 400-a-month medication.”

Kuss should take a blood thinner, but the cost of her medications has put her in the Medicare donut hole, a coverage gap that’s triggered when prescription costs hit a certain amount for the year. Without coverage, affording all of her medicine is simply out of reach.

Lillian Pacheco, 67, retired in March and says she’s already in the Medicare donut hole this year. She spends much of her time searching for better health coverage. Pacheco told The Epoch Times that she has diabetes, and every three months, her medications add up to $360.

Linda Butt, 74, says she tries to save money by looking for deals like grocery stores that offer gas incentives. She uses coupons as much as possible. Recently she found a good price on kitty litter and bought two bags. But one of her medications recently went up to $500 per month. She used to pay around $900 a month combined for all medications, and it’s now closer to $1,500 per month.

“I’m seriously thinking of giving up medication and letting diabetes take over,” Butt said. “I realize everything is going up, but they are sure not thinking about us seniors.”

While younger people might have the ability to take on a second job or find a better-paying job to make ends meet, senior citizens live on a fixed monthly income that will remain essentially the same. A senior aged 82 may have retired in 2000 and the monthly income that covered costs back then doesn’t go as far anymore.

When asked where they feel inflation pressures the most, many Millersville Senior Center patrons—drivers and non-drivers alike—mentioned the cost of gas.

“My daughter takes me around,” Fred Busswood, 89, told The Epoch Times, and when she does, he notices what she’s paying for a gallon of gas. Busswood doesn’t remember seeing gas prices this high before.

Kuss used to drive to the senior center.

“Those of us who are close walk now, to help with the gas prices,” Kuss said.

Another senior said she’s given up recreation and traveling. Her once weekly trips to a park in her town now happen just once a month because she can’t afford the cost of gas to get there.

‘The Country Is Not Being Managed Right’

“Once it goes up, it won’t go down,” Jack Gardner, 76, told The Epoch Times. “The country is not being managed right. We’ve got gas reserves we’re not using.” He believes some who are raising prices may be using inflation talk as an excuse to keep their prices higher than necessary.

“Food, water, electric—everything has gone up,” Tom Schultz, 85, told The Epoch Times. “Whatever [increase] you got in Social Security, you may as well forget it.”

A cost of living adjustment increased the Social Security benefit that seniors receive by 5.9 percent in January—the largest increase in 30 years. But seniors say that increase was eaten up by inflation and an increase in the cost of Medicare Part B health insurance.

Jerry Cunningham, 79, says his quarterly water bill has doubled, to $64 per quarter from $31, and the electric company has sent mail warning of a rate hike.

Some seniors say they’ve changed their eating habits or given up pleasure snacks. One reported that a local discount store where she used to get snacks on the cheap has increased the cost of coffee to $12.99 from $7.99. And the cost of nuts has climbed out of reach too.

Another says she’s wearing extra sweaters and has her heat turned way down because she doesn’t want to fill her fuel oil tank again this year.

As he listened to his senior center mates share their stories, Busswood said he started to realize how much people were hurting and felt it was good to understand each other in this way.

Several seniors mentioned a local hamburger joint that’s now charging $10 for a plain burger plus $1 for each topping, such as lettuce, tomato, or cheese. It didn’t sound like they would be going there anytime soon.

Schultz doesn’t hold out a lot of hope for an economic fix, but he has some ideas.

“Tell Washington to give me a call.”