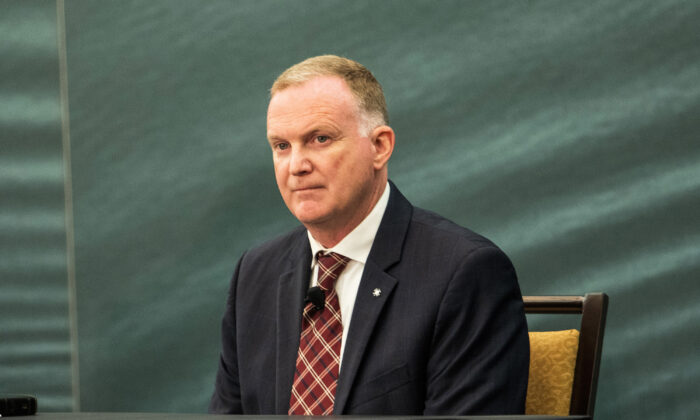 The senior RCMP officer whose handwritten notes have ignited the controversy about allegations of political interference in the investigation of the Nova Scotia mass shooting said on July 26 that he stands by his account.

Chief Superintendent Darren Campbell also said that any kind of interference in investigations, political or not, is unacceptable.

A day after RCMP Commissioner Lucki testified before the House of Commons Standing Committee on Public Safety and National Security that there was no political interference in the investigation into the killings, Campbell said he stood by the notes he recorded at the teleconference he had with the commissioner on April 28, 2020.

“What I will say is that my notes are an accurate description of my recollection of that conversation,” said Campbell on July 26 to the Mass Casualty Commission (MCC), an independent public inquiry created to examine the tragedy that left 22 dead April 18–19, 2020.

“And some of the words that were used, what transpired between the commissioner’s office and anyone within government, I’m not privy to that, I was never part of that—I stand by my notes.”

Campbell had written that Lucki made a “promise” to then-Public Safety Minister Bill Blair and the Prime Minister’s Office that the firearms information would be made public, and that it was tied to the forthcoming gun policy from the Liberal government.

In his testimony to the standing committee on July 25, Blair said he had not directed the RCMP to release “any specific information nor did I receive a promise for them to do so.”

“Let me be very clear. At no time did I ask Commissioner Lucki to reveal that information. At no time did I direct her in any way in communications. She did not make any promise to me,” the former public safety minister said.

Blair, now minister of emergency preparedness, was responding to Conservative MP Raquel Dancho, who asked if his office had received assurances from Lucki that the types of weapons used in the shooting would be released to the public at the press conference on April 28, 2020.

Blair’s testimony was followed by Lucki’s, who said the minister asked her about the gun inventory beforehand, when probed by Dancho.

“You made a promise to him that that information would be released on the April 28 press conference, correct?” Dancho asked.

“I confirmed, in fact, that they were going to be part of the media event,” Lucki said.

In his notes, Campbell detailed his concerns that disclosing weapon details to the public could “jeopardize” the investigation being carried out by the RCMP and U.S. law enforcement, which he reiterated during the public inquiry.

“I was very concerned because for me, as a former team commander who understands the need to protect certain information, so that you could advance your investigation and hopefully meet your objectives … there was a very good reason why we could not release those details,” he said.

“And we owe it to—particularly the victims or survivors and their families—to do our very best to be able to meet those objectives, period.”

Campbell’s version of the conference call was backed by Lee Bergerman, former RCMP assistant commissioner and commanding officer of the H Division in Nova Scotia, and Chief Superintendent Chris Leather, director of criminal operations in Nova Scotia, who testified to the committee on the same day after Lucki.

“So [Lucki] said the pressure was from [Blair] and the Prime Minister’s Office—that she had promised them that that information would be released—and the pressure was a result of it being tied to the forthcoming gun policy from the Liberal government. Is that correct?” Dancho asked Bergerman.

Leather added that Lucki did reference the impending gun legislation by the Liberal government recorded in Campbell’s “comprehensive and detailed” notes.

“I would agree with the statements made concerning the minister, the Prime Minister’s Office, and the impending gun legislation,” he said.

Campbell told the MCC that interference of any form would impede the investigation of the RCMP.

“Any interference, whether it be political or otherwise, that would have deterred us from properly investigating these offences and seeking justice the families deserved was unacceptable to me,” he said.