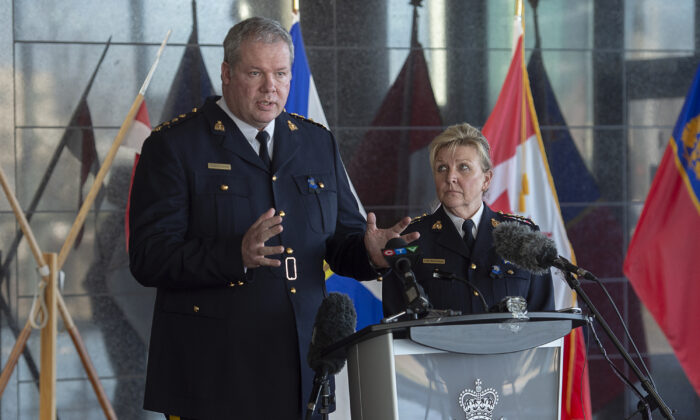 A former RCMP assistant commissioner has backed her colleagues’ claims that Commissioner Brenda Lucki said she was pressured by then-Public Safety Minister Bill Blair and the Prime Minister’s Office (PMO) to release details of firearms used in the 2020 mass shooting incident in Nova Scotia to further the Liberal government’s gun control legislation.

Lee Bergerman, also the former RCMP Commanding Officer of H Division in Nova Scotia, testified before the Standing Committee on Public Safety and National Security on July 25, saying that she agrees with the handwritten notes of her subordinate Superintendent Darren Campbell that Lucki had made a “promise” to Blair and the PMO that the details on firearms would be made public.

“So [Lucki] said the pressure was from [Blair] and the Prime Minister’s Office—that she had promised them that that information would be released—and the pressure was a result of it being tied to the forthcoming gun policy from the Liberal government. Is that correct?” said Conservative MP Raquel Dancho.

“That’s correct,” said Bergerman, who retired earlier this year after having served 36 years in the RCMP.

The evidence on Lucki allegedly citing requests from the federal government over releasing the firearms information was contained in documents released by the Mass Casualty Commission in June. The evidence includes the handwritten notes of Campbell and an email letter to Lucki by then strategic communications director Lia Scanlan.

Both documents related to an April 28, 2020, teleconference between Lucki and RCMP H Division.

Lucki and Blair have said there was no political interference in the investigation into the killings.

Bergerman said shortly after Campbell updated the media on the investigations of the incident on April 28, 2020, she was approached by a “visibly upset” Scanlan, who told her that Deputy Commissioner Brian Brennan was “very mad” with the division, and demanded they join the conference call later that day.

“We all assembled in my boardroom, and were joined by the commissioner and Deputy Commissioner Brennan and Sharon Tessier from national headquarters and Daniel Brien,” she told the committee.

“The commissioner started the conversation. It was evident she was very angry at my team, the tone of her voice, and what she said to all of us, made it apparent she was not happy. She felt disrespected and disobeyed.”

Nova Scotia RCMP had reportedly pushed back on Lucki’s directive to release information on firearms to the public, which according to them, could compromise their investigation of the tragedy that left 22 dead on April 18-19, 2020.

Chief Superintendent Chris Leather, director of criminal operations in Nova Scotia, who also attended the teleconference, said he was taken aback by the discussion.

Similar to Bergerman, he testified at the committee that Lucki did reference the impending gun legislation by the Liberal government recorded in Campbell’s “comprehensive and detailed” notes.

“I would agree with the statements made concerning the minister, the Prime Minister’s Office, and the impending gun legislation,” Leather said.

Neither Bergerman nor Leather was aware that the Trudeau government planned to announce the ban on 1,500 types of “assault-style” weapons in Canada on May 1, in the aftermath of the mass killing, they testified.

Lucki said she had provided the government information about what would be shared during the April 28, 2020, press conference on the events.

“At that time, I was asked if the information about the weapons would be included. When my communications team told me that it would be, I relayed this information back to Minister Blair’s Chief of Staff and the Deputy Minister of Public Safety,” she said.

“Regarding my use of the word ‘promise’ during the [April 28] meeting I had with my team following that press conference at that time, and in that context, I was trying to convey that I’d already confirmed to the minister that the information about the weapons would be released during the press conference, a confirmation made based on the information I had been provided.”

This “miscommunication” resulted in Lucki providing inaccurate information to her superiors, she said.

“I felt I had misinformed the minister and by extension, the prime minister.”

Asked by Liberal MP Ken Hardie if there is a possibility that Lucki was unhappy due to a failure in the communication process, rather than a failure to release the details of the firearms, Bergerman said no.

“That’s not what was communicated from her during the phone call—it was directly related to pressure about the caliber of weapons, and that we didn’t understand the big picture of the dynamic here with downtown, and [she] certainly didn’t say on the call that she was displeased about our overall communication,” Bergerman said.

Tessier, a former director general at National Communication Services, said she remembered Lucki being irritated during the teleconference as the commissioner had told the minister that the RCMP would release the gun details.

“But I do not remember [any] talk of pressure or any of the like. I didn’t take notes,” said Tessier, who retired last November.

Dancho said she found it “interesting” that the testimonies of officers from RCMP headquarters in Ottawa and RCMP in Nova Scotia differed while noting Tessier worked with headquarters.

“So the four individuals from the RCMP in Nova Scotia have a different recollection than Miss Tessier and Commissioner Lucki. I find that very interesting,” she said.

Firearms Details Only Allowed Within RCMP

Leather said Lucki contacted him on April 22, 2020, requesting the gun inventory—makes, models, and serial numbers—of weapons used in the mass shootings, which prompted him to discuss the matter with the director of RCMP’s Serious Incident Response Team (SIRT) the next day.

“It was quite clear from our conversation with the SIRT director, that we would be allowed to provide that gun inventory to the commissioner, so long as it was used within the RCMP, and that’s it,” he said.

“That was the agreement and the commitment that we made to the director of SIRT, which I passed along to Miss Bergerman, which presumably went to Ottawa.”