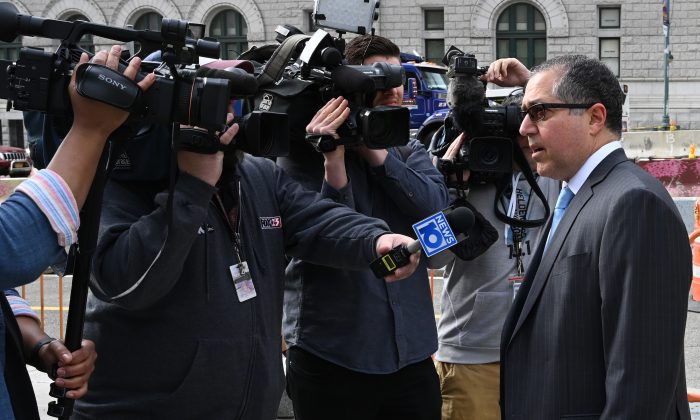 Keith Raniere's lawyer, Marc Agnifilo, speaks to the press as he arrives at Brooklyn Federal Court in New York on May 7, 2019. (Timothy A. Clary/AFP/Getty Images)
Crime and Incidents

Senior Member Breaks Down in Court Over NXIVM’s ‘Horrible Evil’

NEW YORK—A former high-ranking NXIVM member who served on the executive board broke down in tears during testimony on May 9 as he read from a “twelve-point mission statement” penned by the group’s leader, which shaped much of the philosophy and values behind NXIVM. He said, looking back, that the document was truly nefarious.

Mark Vicente told the court he had read the document around “500 to 1000” times during his time in NXIVM, usually at the start of each so-called self-help intensive course. During hours-long testimony that will resume next Monday, he described the group’s inner workings to the court and said the curriculum taught by Keith Raniere—who sat about 10 yards away during the testimony with a bright blue sweater and white collar—was “manipulative.”

“It’s a fraud, it’s a lie,” Vicente told the court under oath in tears. “I’m ashamed. This was used to hurt people … This well-intentioned veneer covers a horrible evil.” Vicente is the second witness so far in the trial to testify in the case of the U.S. v. Raniere et al.

The document (pdf) contained the group’s core guidelines in which they were instructed to recite, “I will not choose to be a victim.” One of the points in the NXIVM document also told members to keep “all its information confidential.”

Referred to as the “Vanguard” by devotees in the United States and Mexico, Raniere was the founder and leader of the purported self-help organization NXIVM. He is accused of having sexual “slaves” as part of a secret society within NXIVM dubbed DOS.

Raniere faces a maximum sentence of life in prison for seven criminal counts, including sex trafficking, forced labor conspiracy, and racketeering. The other 5 defendants in the case have all pleaded guilty.

Vicente, who was a co-founder of one of NXIVM’s subgroups—an all-male society dubbed the “Society of Protectors”—said he felt “bamboozled” and “honestly stupid” for believing that everything taught by the group was “of the best intent.” With a background in filmmaking and born in South Africa, Vicente said he took his first intensive course in 2005.

During his testimony, Vicente gave an inside look into the group’s ranking system dubbed the “strike-path.” Beginning members are given a white sash to wear around their necks before they can move up in the company by recruiting more participants and enrolling in more classes themselves. After the white sash came a yellow one, where members could apply to become a coach. Members could only start earning money in the next rank called “proctor,” where they earned a 10 percent in commission for every participant they brought in.

Years after coaching and enrolling members, Vicente joined the group’s executive board in 2009, which also included co-defendant Claire Bronfman, an heiress to the Seagram beverage company; co-defendant Lauren Salzman, the daughter of the group’s president Nancy Salzman; and Emiliano Salinas, the son of former Mexican president Carlos Salinas de Gortar, among others.

Vicente also described the many programs and divisions under the umbrella of NXIVM. He said there were “over 60” companies within it. Among these groups are one of the main companies called “Executive Success Programs” and a women’s only group dubbed Jness.

“Clare Bronfman financed many projects and was similar to an acting CFO,” Vicente said. She also leaded the many lawsuits against members who spoke out against the group.

Raniere was at the top of every single program. Vicente testified that if any member spoke badly of Raniere or the company, they would be “shunned” by the community—their actions were said to be an “ethical breach.”

High-ranking members of the group also chided the use of the word cult. “They brought up the word ‘cult’ and said the word doesn’t exist. There’s no definition for it,” Vicente explained.

The teachings passed on from Raniere, which were presented by Nancy Salzman, “played with our moral compass,” Vicente explained. He said the topics they touched upon, often about male and female relationships, “minimized morality.”

During testimony, Vicente said he could never figure out where all the profit in the company went—it was a “complete mystery.” He described a conversation with Raniere about NXIVM’s financial situation, when the leader said if one company was destroyed, “we would still be ok” because there are so many companies.

Raniere had also told Vicente that he was being spied on by the government because he had such a “high I.Q.” and was regarded as a “threat to society.” Vicente added that in the bizarre exchange, Raniere had told him that Bill Clinton had asked him for money on one occasion, which he refused to give. Raniere said this prompted Clinton to go after his businesses in “retribution.”

“Bill Clinton’s people asked for some money,” Vicente said. Because of this, Raniere said he could not do business in Arkansas.

In previous days, the court heard from prosecutors that Raniere was the “highest master” of the secret society DOS and forced its members—all women—to have sex with him.

According to court documents, the secret society allegedly operated as a pyramid scheme, with levels of “slaves” headed by “masters.” Slaves were then expected to recruit their own slaves, thus becoming masters themselves. Many of the DOS members were branded with a cauterizing pen during a process that took “20 to 30 minutes.”

DOS allegedly recruited members on the condition that they would give up personal, often embarrassing, information about themselves, including compromising images or videos, as “collateral.” Once inside, members were regularly required to provide additional collateral to ensure that they kept the group’s activities secret.