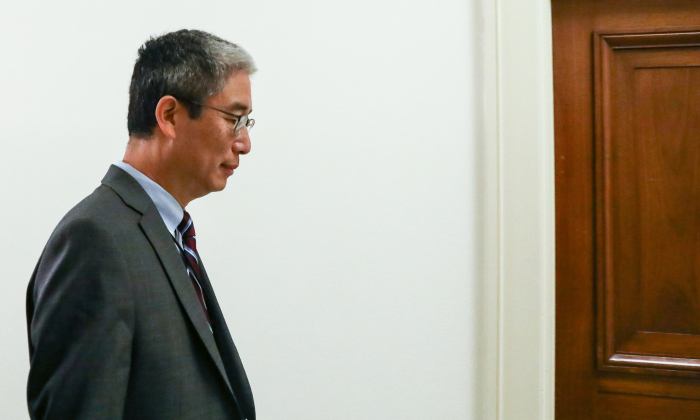 Bruce Ohr, a Justice Department official demoted from the posts of associate deputy attorney general and director of the Organized Crime Drug Enforcement Task Force, leaves for a lunch break from a closed hearing with the House Judiciary and House Oversight and Government Reform committees on Capitol Hill in Washington, on Aug. 28, 2018. (Samira Bouaou/The Epoch Times)
Politics

A group of senior FBI and Justice Department (DOJ) officials knew about conflicts of interest linked to the infamous anti-Trump dossier and knowingly withheld that information from a secret surveillance court in order to obtain a warrant to spy on the Trump campaign, according to lawmakers.

The lawmakers on Aug. 28 questioned Bruce Ohr, a once-senior DOJ official who has since been demoted for failing to disclose the same conflicts of interest to his superiors.

During a seven-hour session, Ohr told members of the House Judiciary and Government Oversight committees that he informed six senior FBI and DOJ officials that his wife received $44,000 from Fusion GPS while she worked on the same anti-Trump project as Christopher Steele, the former British spy who concocted the dossier.

Ohr also told the same officials of his regular contacts with Steele and Glenn Simpson, the co-founder of Fusion GPS, and also confirmed to lawmakers that he informed his six handlers of Steele’s intense bias against Trump.

Despite learning of the conflicts of interest and bias from Ohr, a group of select senior FBI and DOJ officials omitted those facts from 400 pages of claims they presented to the Foreign Intelligence Surveillance Court in October 2016 for a warrant to spy on former Trump campaign volunteer Carter Page. Lawmakers who have reviewed the entire unredacted applications say that the names of Bruce and Nellie Ohr are absent from the documents. The applications also didn’t disclose that Hillary Clinton’s campaign funded part of the dossier and that the dossier’s author was biased against Trump.

The revelations from Ohr’s testimony spell further trouble for several of the key players in “Crossfire Hurricane,” the FBI’s codename for the counterintelligence probe of the Trump campaign that started in July 2016. The new evidence also adds cracks to the already shaky foundation of the investigation by special counsel Robert Mueller, who took over Crossfire Hurricane in May of last year.

“Operational roles played by Bruce Ohr and Nellie Ohr, and their financial gain from it, were known to at least 1/2 dozen senior FBI and DOJ officials prior to the first FISA application but were never disclosed,” Rep. John Ratcliffe (R-Texas) wrote on Twitter.

Operational roles played by Bruce Ohr and Nellie Ohr, and their financial gain from it, were known to at least 1/2 dozen senior FBI and DOJ officials prior to the first FISA application, but were never disclosed.

After the FBI terminated Steele as a source for leaking to the media, a group of handlers privately approached Ohr, who had a years-long relationship with Steele, and convinced him to become a back channel between the bureau and the foreign spy, according to Rep. Mark Meadows (R-N.C.).

Ohr told lawmakers he willingly assisted the FBI and funneled information from Steele to the bureau. Rep. Darrell Issa (R-Calif.) told Fox News that Ohr knew that Steele’s dossier was a mashup of “double hearsay” that could never stand up in court.

Some of the senior officials Ohr mentioned have already become household names after the release of their profanity-laden and biased text messages. Ohr told lawmakers behind closed doors that his bureau handlers included then-FBI attorney Lisa Page and then-Deputy Assistant Director Peter Strzok, according to sources who spoke to investigative reporter Sara Carter.

Strzok and Page carried on an extramarital affair while exchanging messages expressing intense hate toward Trump and favoring Clinton. Both were part of Crossfire Hurricane and the Mueller probe. The FBI’s second-in-command at the time, Deputy Director Andrew McCabe, was another handler, Ohr said.

The FBI fired McCabe in March for lying and leaking and Strzok in August for his biased texts.

Lisa Page, who left the bureau in May, downplayed her connections to Ohr in her testimony to the committees. Ohr told the lawmakers a different story, describing Page as one of his regular contacts at the bureau. Lawmakers are convinced one of them is lying and plan to press the matter to get to the truth.

Republican lawmakers on the House Judiciary and Government Oversight committees unearthed the latest evidence as part of an investigation into action taken by the FBI and DOJ before and after the 2016 election. Congressmen are keen to determine whether the investigation of the Trump campaign was started out of a political necessity to help Clinton win the election and to hamstring a potential Trump presidency.

The evidence so far appears to support those suspicions. Clinton and the Democratic National Committee paid Fusion GPS to conduct opposition research on Trump, which resulted in Steele’s dossier. While Steele worked on the dossier, Fusion GPS accepted money from Russia for a separate lobbying project, which eventually led to the Trump Tower meeting. Democrats have used the meeting as the central evidence to prop up accusations that the Trump campaign attempted to collude with Russia to win the election.

Meanwhile, at the FBI, Strzok—the lead agent on both Crossfire Hurricane and the investigation of Clinton’s use of an unauthorized private email server while she was secretary of state—let Page know how much he hated Trump, guessed that Clinton would win “100,000,000 [to] 0,” spoke of an “insurance policy” in the event that Trump won the election, and said he dreamed of “impeachment,” days after being assigned to the Mueller team.

Steele also openly expressed his bias against Trump. The British spy also lobbied Ohr to get a visa for Oleg Deripaska, a Russian billionaire close to Russian President Vladimir Putin.

“This is the biggest abuse of power I have ever seen and I’m going to keep digging at it and so are my colleagues until we get all the answers for the American people,” Rep. Jim Jordan (R-Ohio) wrote on Twitter.

.@Jim_Jordan on developments after DOJ official Bruce Ohr met with the House Oversight Committee: "This is the biggest abuse of power I have ever seen and I'm going to keep digging at it and so are my colleagues until we get all the answers for the American people." #Dobbs pic.twitter.com/CmrdUZl3zL

Issa hinted and Ratcliffe confirmed that Ohr had informed the committees that Mueller’s team never approached him for an interview.

Ohr confirmed in his testimony that he kept his backdoor operation secret from his superiors, corroborating an earlier statement by Rosenstein, who said he was unaware of Ohr’s dealings.

“How the hell is Bruce Ohr still employed at the Justice Department?” Trump wrote on Twitter on Aug. 29. “Disgraceful! Witch Hunt!”

How the hell is Bruce Ohr still employed at the Justice Department? Disgraceful! Witch Hunt!

According to Issa, Ohr’s wife likely was picked for the job at Fusion GPS because of her husband’s senior post at the FBI.

“His prior relationship with the owner of Fusion GPS, Glenn Simpson, in fact appears to be how she got the job,” Issa said. “He was talking about her being a Russia expert, but there was no indication that she was sought after or worked regularly as a Russian expert, but rather she got this job for $44,000 to be a conduit—a researcher—but, in fact, to make [Ohr] a conduit.”

In response to a list of questions about Ohr, the DOJ referred The Epoch Times to the office of the DOJ Inspector General. The inspector general’s office declined to comment.

The inspector general initiated an investigation on March 28 concerning FISA compliance, in relation to the surveillance of Carter Page.

“As part of this examination, the OIG also will review information that was known to the DOJ and the FBI at the time the applications were filed from or about an alleged FBI confidential source,” the OIG said in a statement at the time.

The FBI didn’t reply to a request for comment by press deadline.