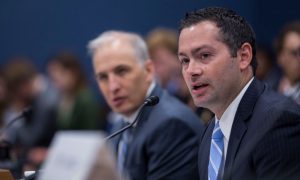 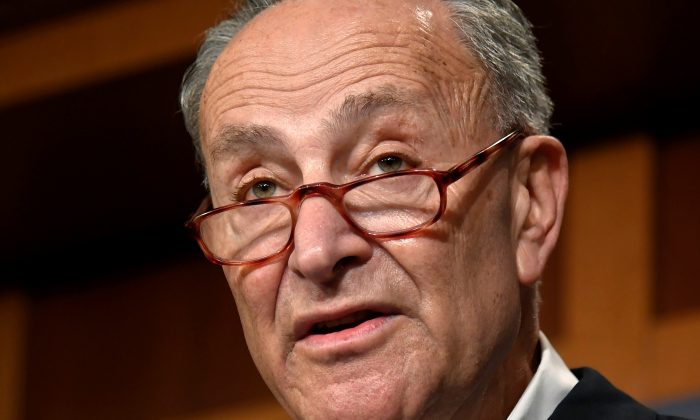 Senate Minority Leader Charles Schumer (D-NY) makes remarks a day after the Midterm Elections, in which the Senate Republicans retained their majority and the House saw Democrats sweep into control, on Capitol Hill in Washington, D.C. on Nov. 7, 2018. (Mike Theiler/Reuters)
US-China Relations

WASHINGTON–Two U.S. senators on Sept. 16 asked the FCC and national security agencies to review whether two Chinese state-owned telecom companies should be allowed to operate in the United States, at a time of heightened concern about possible Chinese spying.

“These state-owned companies continue to have access to our telephone lines, fiber optic cables, cellular networks and satellites in ways that could give it (China) the ability to target the content of communications of Americans or their businesses and the U.S. government, including through the ‘hijacking’ of telecommunications traffic by redirecting it through China,” the senators wrote in a letter, which was also sent to the departments of defense and homeland security.

The FCC in May voted unanimously to deny another state-owned Chinese telecommunications company, China Mobile Ltd., the right to provide services in the United States, citing risks that the Chinese regime could use the approval to conduct espionage against the U.S. government. The FCC disclosed at the time that it was reviewing existing approvals.

Pai “has made it clear that the Commission is reviewing other Chinese communications companies such as China Telecom and China Unicom,” FCC spokesman Brian Hart said.

China Mobile had sought approval in 2011 to provide interconnection services for phone calls between the United States and other countries which would have given it enhanced access to U.S. telephone lines, fiber-optic cable, cellular networks and communications satellites.

The FCC voted 5-0 in May to deny the application, with Commissioner Brendan Carr saying “China Telecom has been hijacking U.S. traffic and redirecting it through China.”

Geoffrey Starks, another FCC commissioner, said “the national security environment has changed since those (earlier) applications were granted.” He said it was a “top priority” to address concerns about other carriers.

The Trump administration is waging a broader campaign to limit the role of Chinese telecommunications firms in the build-out of 5G networks.

In May, the Trump administration banned Huawei Technologies from buying vital U.S. technology without special approval and effectively barring its equipment from U.S. telecom networks on national security grounds.

The United States in August extended a reprieve that permits Huawei to buy components from U.S. companies to supply existing customers but also added more than 40 of Huawei’s units to its economic blacklist.