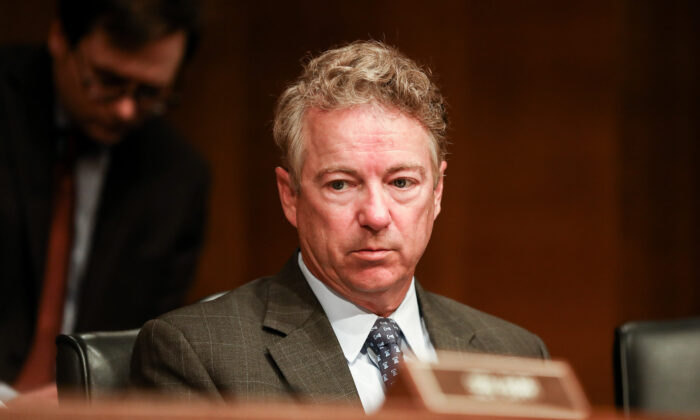 Sen. Rand Paul (R-Ky.) at a Senate hearing regarding the coronavirus in Washington on March 3, 2020. (Charlotte Cuthbertson/The Epoch Times)
By Zachary Stieber

The first U.S. senator to be diagnosed with the CCP virus said he wouldn’t have been tested under current guidelines but that he got a test anyways because of a lung that was damaged by his neighbor years ago.

Sen. Rand Paul (R-Ky.) tested positive for the CCP virus, his office announced on Sunday. The Epoch Times refers to the novel coronavirus, which causes the disease COVID-19, as the CCP virus because the Chinese Communist Party’s coverup and mismanagement allowed the virus to spread throughout China and create a global pandemic.

In a statement Monday, Paul said he took the initiative to get tested even though he didn’t think he had the new illness.

“Given that my wife and I had traveled extensively during the weeks prior to COVID-19 social distancing practices, and that I am at a higher risk for serious complications from the virus due to having part of my lung removed seven months ago, I took a COVID-19 test when I arrived in D.C. last Monday,” he said.

Paul noted that nearly every member of the 100-person body travels by plane multiple times per week and attends large gatherings, leading him to think his risk factor for exposure to the virus was similar to that of his colleagues. Referencing a fundraiser he attended in Kentucky on March 7, he said he had no contact or proximity to either of the two people who later tested positive for COVID-19 and that local police said public health officials were contacting those who were believed to be at higher risk from possible exposure.

Paul said he “didn’t fit the criteria for testing or quarantine” and “had no symptoms and no specific encounter with a COVID-19 positive person.” His travel, together with his compromised lung, led him to seek testing.

He is still not showing symptoms of the virus, which are similar to the flu.

“For those who want to criticize me for lack of quarantine, realize that if the rules on testing had been followed to a tee, I would never have been tested and would still be walking around the halls of the Capitol. The current guidelines would not have called for me to get tested nor quarantined. It was my extra precaution, out of concern for my damaged lung, that led me to get tested,” he said.

Paul called for more testing immediately, even among people who aren’t showing symptoms, asserting that thousands of people want testing but aren’t able to get tested.

Sen. Lindsey Graham (R-S.C.) was in quarantine but tested negative for the new illness.

The senators entering quarantine has sparked a serious look at allowing members of Congress to vote remotely as the Senate and House of Representatives try to put together the largest relief package yet.