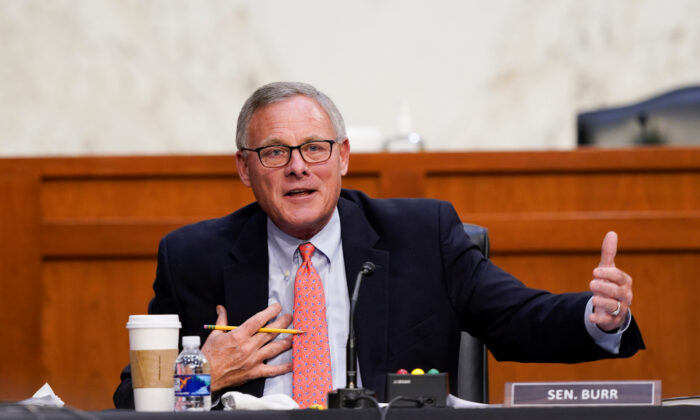 Sen. Richard Burr (R-N.C.) made more than $164,000 from well-timed trades that were executed after receiving briefings on COVID-19 before the pandemic was declared, according to a newly unsealed document.

Shares held by Burr’s wife Brooke in insurance and telecommunications companies were sold on Jan. 30, 2020, just hours before the White House announced that the United States was banning travelers from China due to COVID-19, the document says.

On Feb. 7, 2020, Burr co-authored an op-ed stating that the United States was “better prepared than ever before to face emerging public health threats, like the coronavirus, in large part due to the work of the Senate Health Committee, Congress, and the Trump Administration.” Five days after that, Burr bought $1.1 million in U.S. Treasury funds, which are often purchased as a hedge against a market decline. The following day, Burr moved to sell nearly all the stock he and his wife held.

“Senator Burr explained that he was uncomfortable with a lot of things in the market and other things generally happening around the world; that Burr discussed the fact that there had been a long bull market and that it was due for a correction; and that the surge of Bernie Sanders in the Democratic party’s nomination process was a risk to the market,” according to the document, an unsealed search warrant affidavit authored by an FBI agent.

In the end, Burr “avoided more than an estimated $87,000 in loss as a result of his well-timed stock sales, and profited more than $164,000,” according to the document.

A redacted version of the affidavit was unsealed in June. The new version removes some of the redactions, including large portions of the probable cause for a warrant. The warrant was approved and executed. According to Burr, the Department of Justice dropped its insider trading investigation into him in 2021. The Securities and Exchange Commission is still probing possible violations of federal law, including a law that bars members of Congress from insider trading.

Fauth, a member on the National Mediation Board, sold between $97,000 and $280,000 shares of stocks in six companies on Feb. 13, according to previously released disclosures.

The newly unsealed affidavit showed that an iPad logged into Burr’s trading account from an IP address traced back to the residence of Fauth, and that Fauth called Brooke Burr, his sister and the senator’s wife. After the call ended, Fauth called Burr.

Minutes later, Fauth called a wealth management company and asked to sell some of his holdings. Fauth “sounded hurried [redacted] to sell some of his stock, including stock in oil and energy companies,” the affidavit says. Fauth “implied that he knew more [redacted] about the stock market by virtue of his position and associations in Washington, D.C.” and “mentioned that he knew a Senator.”

Approximately $159,100 in stock was sold from an account owned by Fauth’s wife, Mary.

According to a recording from the talk, the senator told the group that the COVID-19 virus “is much more aggressive in its transmission than anything we have seen in recent history” and “is probably more akin to the 1918 pandemic.”

After stock sales made by Burr and other members of Congress began being reported on in March 2020, Burr said that he “relied solely on public news reports” when deciding to sell many stocks in February.

Burr declined an FBI interview shortly after, according to the affidavit.

The FBI said there was probable cause to believe that Burr violated the STOCK Act.

Burr was the subject of an insider trading investigation. The Department of Justice dropped the probe in 2020.

Burr and Fauth did not respond to requests for comment.